By now, it has become clear that COVID-19 is not “just the flu.” Without a vaccine or treatment available, the novel coronavirus has spread through communities around the world virtually unchecked, prompting entire cities and countries to go into lockdown—their best defense against the fast-moving illness.

COVID-19 and the flu do share some symptoms: cough, fever, weakness, body aches. But, as of March 17, COVID-19 has killed about 4% of the approximately 200,000 people who have been diagnosed with the illness around the world. The flu, by contrast, infects millions of people each year, but usually kills less than 0.1% of them.

COVID-19 demands to be taken seriously—but the death rate associated with it is not set in stone, and may well come out to be far lower than 4%.

Since the COVID-19 outbreak began to pick up steam in Wuhan, China in January, experts have been scrambling to get a handle on the disease and the way it behaves. But they have also warned that estimates are not exact, and that numbers are likely to shift over time. One key reason: people with milder versions of the illness are underrepresented in official case counts, since they may not be sick enough to seek medical attention or realize they have anything more than a cold. Some people, research now suggests, may get infected and become contagious without showing any symptoms at all.

That means the total number of reported cases is very likely an underestimate—and by not counting many mild or asymptomatic cases, we’re likely overestimating the disease’s overall case fatality rate. The same problem likely applies to other diseases—such as the flu, which can vary in terms of severity from year to year—but it’s especially pronounced in an unprecedented outbreak with limited testing capacity.

Looking at data from countries with robust testing systems does support the idea that the disease’s case fatality rate may be lower than 4%. Countries that have tested many people are generally reporting lower case fatality rates than those that have tested fewer, and focused on severe cases. This suggests that when testing networks are broadened to catch people with less serious illnesses, and case counts then reflect this range of severity, death rates go down. 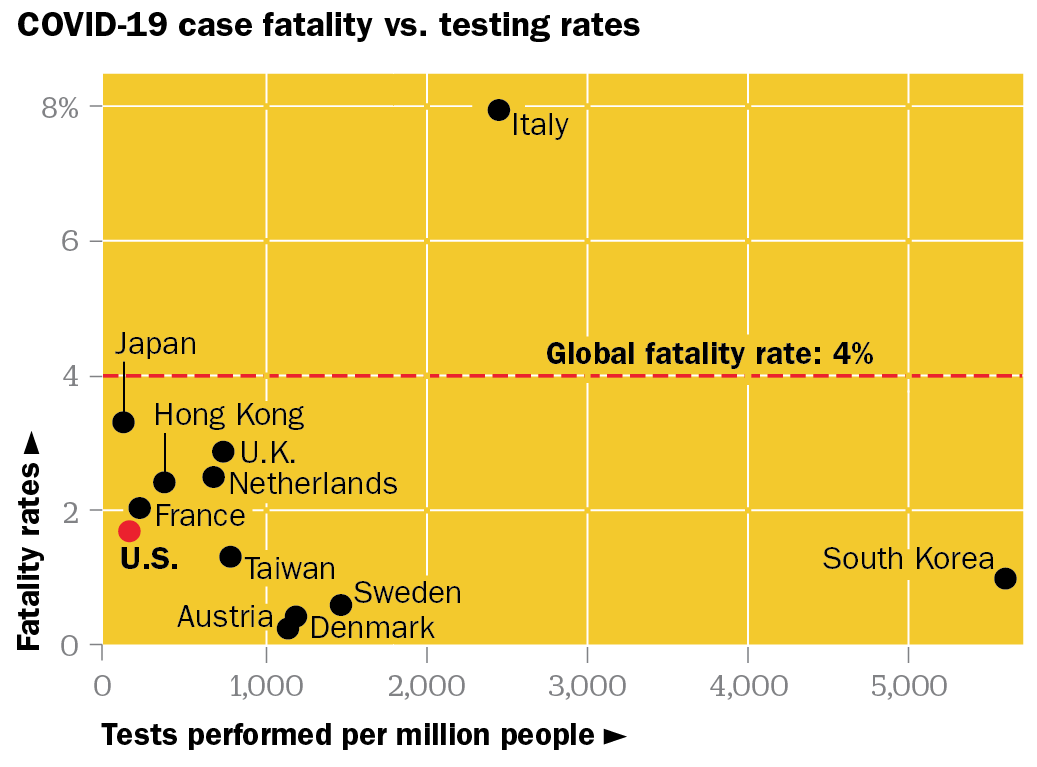 What’s happened in the U.S. over the last few weeks shows this trend clearly: On March 5, when the country was testing at a rate of only 58 per million, the case fatality rate was around 5.4%; by March 17, testing rates nearly tripled, and the fatality rate fell to 1.7%.

The same logic suggests that strikingly low infection rates reported in some of the most crowded parts of the globe—a scant 174 cases among sub-Saharan Africa’s 1.1 billion people, for example—reflect poor surveillance more than hope. 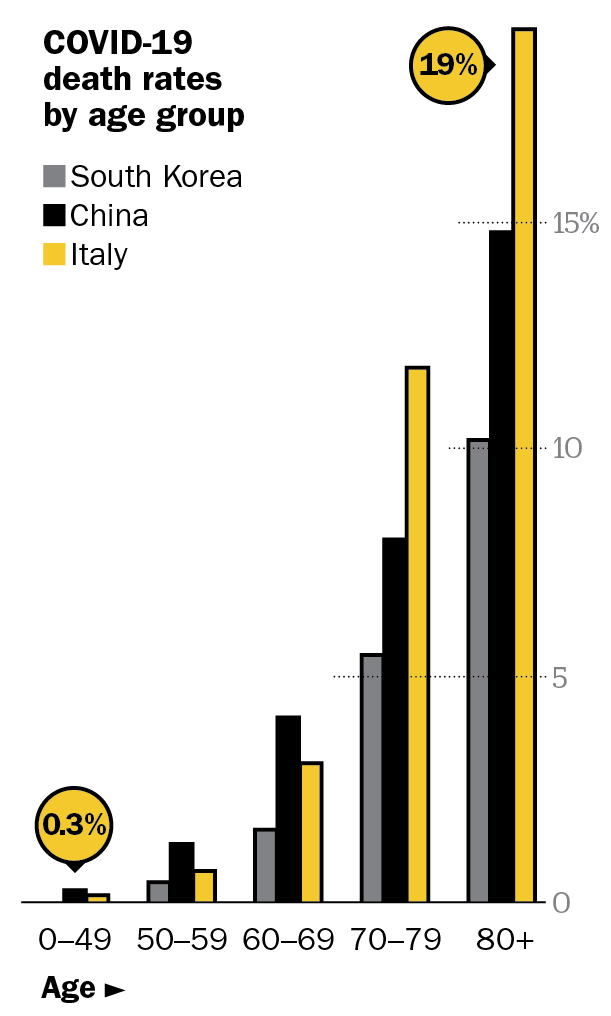 Few countries that are testing at relatively high levels are reporting death rates above 2%, but Italy has proven an outlier. Even with over 2,400 tests given per million people, the country is still reporting a case fatality rate nearly 8%. While the exact reason for the discrepancy is unclear, it could point to differences in the country’s testing strategy, the specific test it is using or something unique about the actual outbreak there. One prominent theory is that Italy has suffered more than most countries due to its relatively elderly population. According to the United Nations, Italy has the world’s second highest median age—and COVID-19 seems especially dangerous for the elderly.

Even when taking the current estimated global case fatality rate of 4% at face value, COVID-19 looks more like influenza than other once-novel coronaviruses, though it does seem to be more contagious than other strains in the coronavirus family. Severe Acute Respiratory Syndrome (SARS) killed about 10% of the people who got it, while Middle East Respiratory Syndrome (MERS) was even deadlier, killing 34% of patients. Of course, there was uncertainty during the height of MERS and SARS, too—these numbers are based on epidemiologists’ post-outbreak calculations. 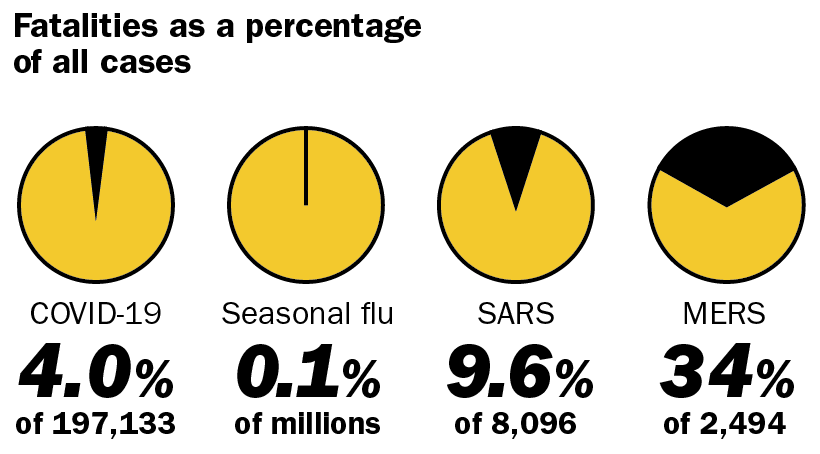 At least so far, COVID-19 does seem more lethal than the seasonal flu but it’s closer to that end of the spectrum than to previous coronavirus outbreaks. And, based on the fact that we’ve had limited global testing to date, and that, to this point, we’ve mostly only tested those with the most severe symptoms or the highest risk of infection, it’s reasonable to imagine that when we have a complete picture of how many people have been infected with COVID-19, its case fatality rate may, indeed, keep falling.

The research is starting to reflect that possibility: A new but not-yet-peer-reviewed paper submitted to the journal estimated, based on available data out of Wuhan, that the overall case fatality rate there is about 1.4%. The researchers noted that it could be even lower, since their analysis accounted only for symptomatic reported cases.

All that said, there’s at least one critical difference between the seasonal flu and COVID-19: we have a vaccine for the former but not the latter. While an experimental COVID-19 vaccine is in development, even if it proves safe and effective, it won’t be publicly available for at least a year. In the meantime, the only way to slow and eventually stop the spread of a pathogen as apparently virulent as COVID-19 is aggressive social distancing—and testing at a scale that can provide individuals with clear guidance on their own personal risks to their communities, and public health officials with population-level information they need to make the right policy decisions. Experts call this “flattening the curve.” 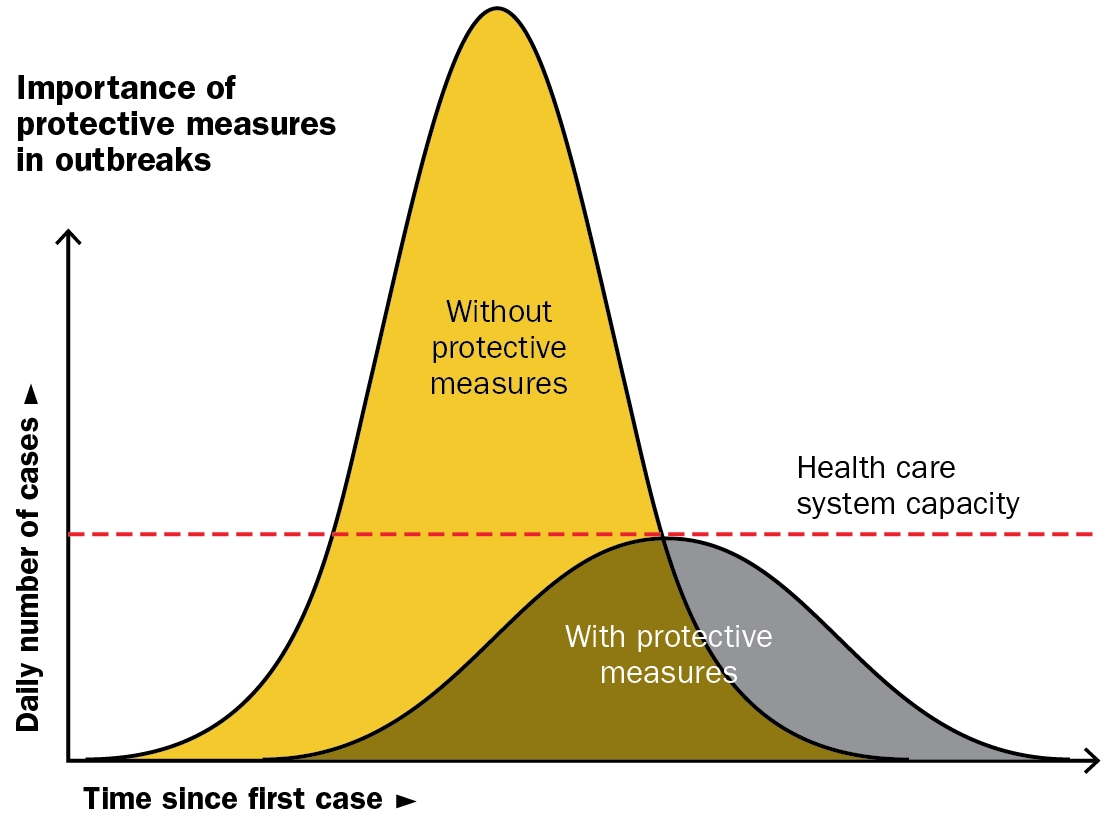 If a community doesn’t take the right protective measures early on, its local outbreak could rapidly spin out of control and turn into a crisis, as the health care system becomes inundated with a caseload it cannot handle. The goal is to avoid a sharp, concentrated uptick in cases that exceeds the capacity of the health care system, in favor of a lengthier outbreak that stays within the bounds of what the system can handle—resulting in fewer people getting sick and dying overall. 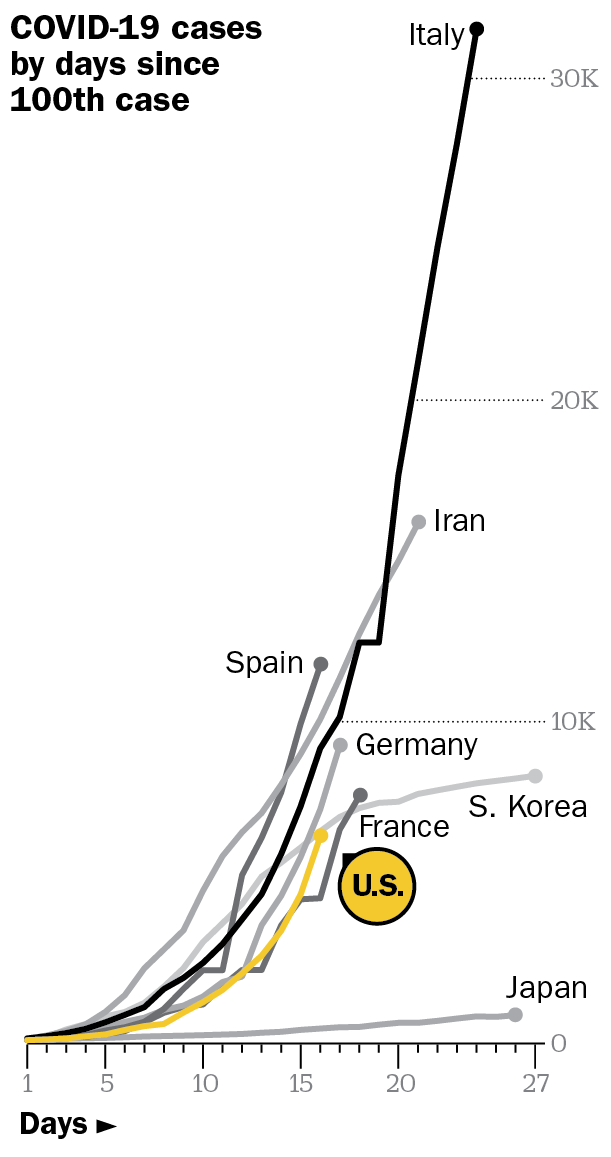 Some countries are succeeding. South Korea, for example, quickly passed a government reform that allowed local manufacturers to make tests based on the WHO’s specifications, scaling up testing resources within weeks of the outbreak intensifying in Wuhan. As a result of that decisive action, it was able to swiftly implement measures like drive-through testing centers, which allowed for wide-scale diagnoses with minimal risk of exposing others.

There’s still time to flatten the curve in the U.S., but the clock is ticking. Models from the CDC reportedly show that, without adequate efforts to slow the virus, more than a million Americans could die and more than 20 million could end up in the hospital. The country has already taken some steps to combat that worse-case scenario, but there’s more to be done. The U.S. government was quick to limit international travel, and has encouraged Americans to stay home and avoid large social gatherings, though some critics say that guidance should have come sooner. The demand for COVID-19 tests also still far outpaces supply, and hospitals preparing for the wave of patients surely incoming fear crucial supplies will run out. These problems require systemic solutions, but people are not powerless. Individuals, healthy or not, can do their part simply by washing their hands frequently and keeping their distance from others. Temporary isolation may be what’s required to help the whole country rebound from COVID-19, together.