On Oct. 2, 2001, a 62-year-old photojournalist named Bob Stevens became the first victim of a coordinated series of anthrax attacks to be admitted to hospital. Stevens inhaled the deadly pathogen after opening one of several letters laced with anthrax spores which were mailed to the offices of prominent senators and media outlets across the U.S. Over the next seven weeks, he and four others would die as a result of their exposure.

For a shell-shocked nation still reeling from the single deadliest terrorist attack in human history on September 11, it was a disturbing realization that there was a new wave of challenges to American security. In early 2002, President George W. Bush announced $11 billion worth of funding to tackle bioterrorism, initiating a decade-long program to establish action plans for how major cities like New York and Boston would cope in the event of a mass attack.

But little did they know that nearly 20 years later, their plans for combating such a hypothetical attack would be utilized on the other side of the globe, inspiring an entire nation’s response to a very different infectious disease outbreak.

After all back in 2001, few Americans had heard of bat-borne coronaviruses, least of all Sid Baccam, the Baltimore-based epidemiologist whose ideas for handling an anthrax attack would later be applied by a team of South Korean doctors racing to find a way to control a COVID-19 outbreak that was rapidly spiraling out of control.

In the decade following the anthrax attacks, Baccam—working as a scientist for Innovative Emergency Management (IEM), a company who work with federal agencies within the Department of Health and Human Services (HHS) like the National Institutes of Health (NIH) and Centers for Disease Control and Prevention (CDC) to simulate responses to national emergencies—became one of the most influential thinkers in devising ways to distribute life-saving medication as quickly as possible.

“The anthrax attacks got a lot of people’s attention,” says Baccam. “Nobody saw it coming. It was the first time that governmental agencies like HHS, CDC and NIH all got together and said, ‘Wow, we kind of got lucky because this was a very targeted attack but what if this was a worst case scenario where millions of people were affected, what would we do?’ And the more and more we studied this, it became pretty clear that the speed of the response was going to save lives.”

Baccam realized that there needed to be a way of controlling the ripples of panic which would likely emanate through the population as soon as the news of an attack broke. He theorized that a city like New York would need to create several hundred hubs—which he dubbed “points of dispensing” or PODs—located in public buildings such as high schools or gymnasiums, at which people could go get medication. And with millions of drugs needed to be distributed in a timeframe of approximately 48 hours, these PODs would need to be efficiently designed to control the flow of people and prevent them from becoming overwhelmed.

“You want people to behave as rationally as possible but you’re fighting against that human nature to panic,” he says. “An idea was to have these large buildings and set them up like a grocery store with multiple lanes to move vast numbers of people through as quickly as possible. At some of the biggest PODs you would need some 120 people working shifts of 12 hours at a time, to try and save lives.”

As 2018 dawned, tensions between North and South Korea were notably strained, a consequence of the North’s ongoing nuclear program.

Jin Yong Kim, an infectious diseases specialist at Incheon Medical Center, was asked by officials at the Korea Centers for Disease Control and Prevention (KCDC) to conduct a study looking at how large quantities of drugs could be distributed to the South Korean people in the event of a bioterrorism attack.

“Since Korea is a divided country, a standing army is prepared for terrorism,” says Kim. “The KCDC has a bio-terror response department, and it is their duty to always be prepared for biological terrorism in advance.”

His research soon drew him to Baccam’s ideas, particularly the plan of setting up dedicated hubs for dispensing medication. “We learned that facilities targeted at large communities require a lot of manpower and equipment, in addition to healthcare workers,” he says.

But while Kim had treated suspected Ebola patients in 2014 as well as Korean victims of the 2015 MERS outbreak, he had little inkling that such facilities could soon be required as part of emergency measures for a pandemic of natural origin.

On Jan. 19, 2020, Kim treated the first patient to test positive for COVID-19 in South Korea. One month later, a super-spreading outbreak at the Shincheonji Church of Jesus in Daegu—the country’s fourth largest city—saw the number of reported cases climb from 31 to more than 1,000 in a matter of days. 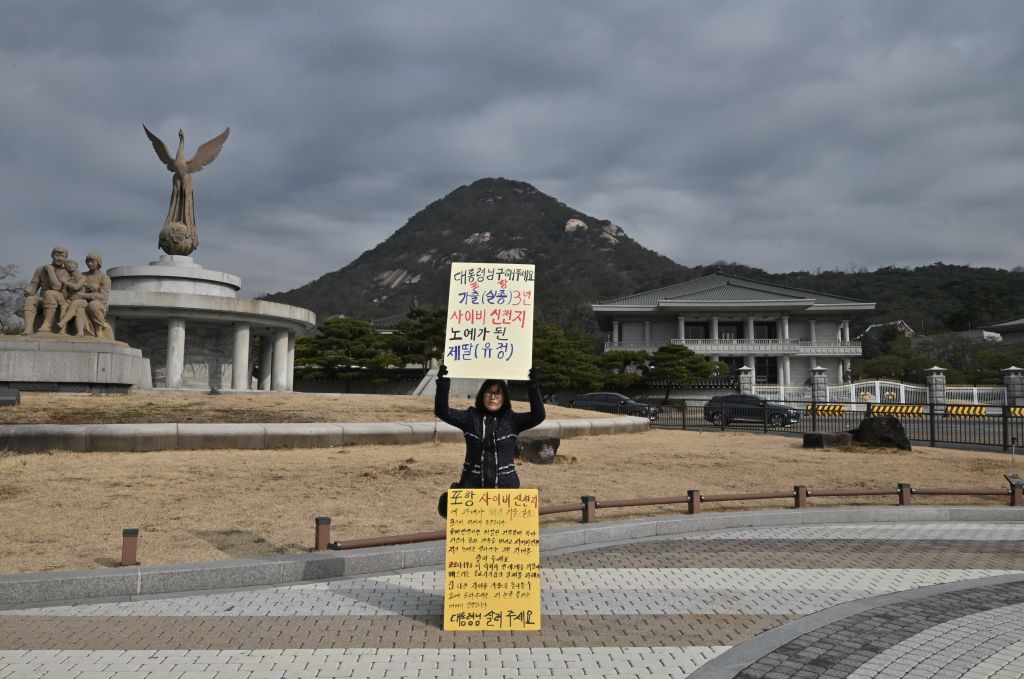 At Kyungpook National University Hospital in Daegu, the mood was one of increasing concern. “We knew that testing was the absolute solution to control the outbreak,” says Ki Tae Kwon, a specialist in the hospital’s department of internal medicine. “If you can’t differentiate the confirmed patients from others, hospital workers will be infected and the hospital itself will become the epicenter. This is the most dangerous situation. But we knew that unless we could find a way to quickly increase our testing capacity, it would become like Wuhan in China.”

As the number of COVID-19 cases swelled, people in Daegu began to panic. Kwon recalls how some were even driving to the nearby city of Busan—South Korea’s second largest city—to seek medical advice. A way of safely testing large numbers of people was urgently needed.

On Feb. 20, Kim stayed up through the night to produce the first design of a potential testing center, inspired in part by his study of Baccam’s anthrax PODs. Rather than dispensing medication, these PODs would be used for conducting mass screening for COVID-19, and to reduce the risk of infecting healthcare workers administering the tests, Daegu residents would be able to access it via their cars.

The design was swiftly passed on to Kwon and his team in Daegu, and just three days later, drive-through testing operations commenced in the parking lot of Kyungpook National University Hospital. Soon there were six such centers across the city. “We were testing 150 people a day,” says Kwon. “Some larger versions were testing 300 people a day.”

With tests being carried out at an approximate rate of one every 10 minutes—a third of the time required for conventional screening—South Korea was soon able to gain a grip on the outbreak which few other nations have managed. By the end of March there were 79 drive-through screening centers distributed across the country, with an app to enable people to locate them easily.

In recent weeks, cases of COVID-19 have slimmed to such an extent that social distancing guidelines have begun to be relaxed. April 30, the KCDC reported no new domestic COVID-19 cases for the first time since February. In total, there have been just 211 cases of COVID-19 per million people in South Korea as of May 5 compared to 3,587 cases per million in the US.

Kwon has no doubts regarding how important drive-through testing has been in controlling the pandemic. “It’s been very, very crucial, particularly in identifying the people who have very mild symptoms or asymptomatic who should be isolated or quarantined,” he says. “To control the outbreak you need to find all these people.”

However, the country remains braced for the possibility of a second wave, an outcome which would likely be triggered by South Korea’s regular influx of visitors from Europe and the U.S. To try and forestall this possibility, Kim has been involved in designing a walk-through screening center at Incheon International Airport capable of testing thousands of foreign travelers per day. Over the next couple of years, he suggests, drive-through centers could even be transformed into mass dispensing points for vaccines or treatments, in line with Baccam’s original vision for anthrax PODs. 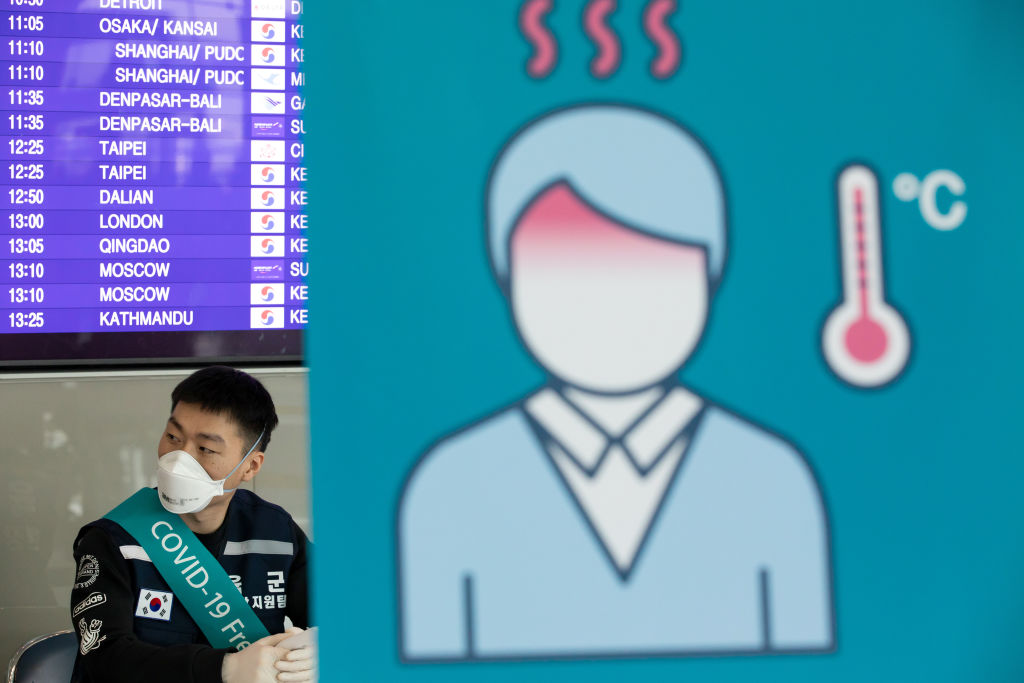 There is of course, a certain irony that the first drive-through screening centers for COVID-19 in the U.S. were only established in mid-March, nearly two months after the first reported coronavirus case on American soil. Baccam had been modelling the spread of the virus for local government officials across regional parts of the U.S. and was not initially aware that the Koreans had been inspired by his previous work until he saw it had been referenced in a series of publications in the Journal of Korean Medical Science on the country’s drive-through testing program. He says that he doesn’t know if any of the U.S.’s considerable bioterrorism preparations have been adapted to cope with the pandemic.

“I know that in the public health realm they have plans for pandemic flu,” he says. “It may not occur to them that they may be able to learn something from things that we had planned for anthrax.” However, he’s glad that many thousands of miles away, his ideas have been utilized to save lives.

“With a lot of the things we do, especially as they pertain to bioterrorism, you hope that none of your work ever has to be put into practice because that means something horrible has happened,” he says. “But in this case, I’m glad to see that something meant for bioterrorism response could be adapted to the coronavirus response to help people.”