Murphy, then 19, had gained weight during a period of depression, and her doctor told her she should lose some. She went from 180 to 125 pounds in 18 months—and even when she knew it was time to stop slimming down, she couldn’t shake the need to chase a goal. Without weight loss, she needed a new target. That became finding the “perfect” diet, one that was clean and pure and would keep her healthy for years to come.

At least, that was how she thought about it then. These days, she uses a different descriptor: “orthorexia,” or an unhealthy obsession with eating healthy food. “I was just being consumed by the idea of perfection, and being quite afraid of food,” says Murphy, now 30 and a successful lifestyle vlogger and author based in Ireland. “That’s all I thought about all day.” 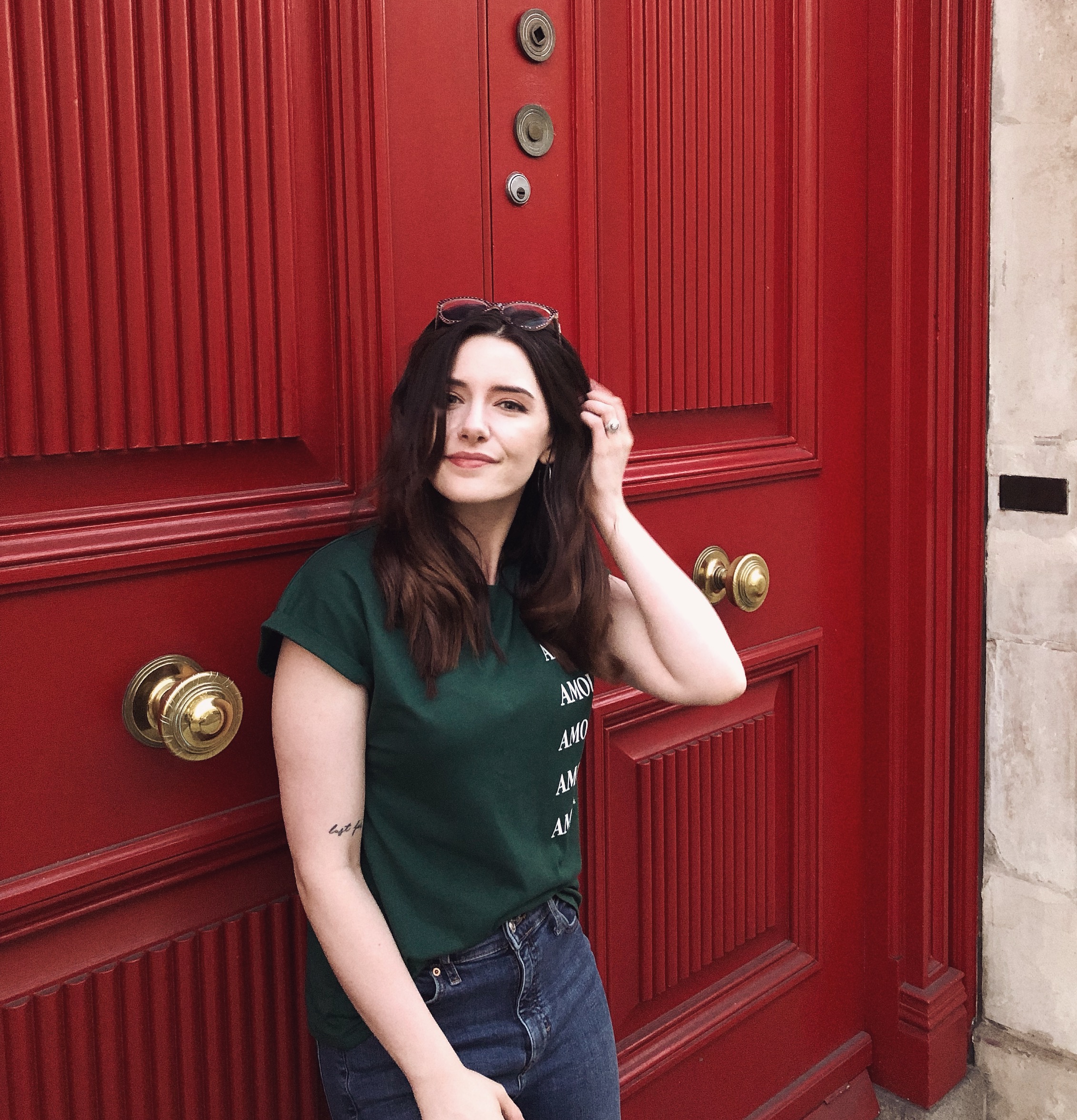 Fueled by influencers peddling extreme diets on social media, Murphy began following a raw diet mostly comprised of fruits and vegetables, and shied away from any situation where she couldn’t control what she ate, even if it meant isolating herself socially. Eating “good” foods made her feel virtuous, while “bad” foods filled her with anxiety, and prompted vivid thoughts of how the meal would work its way through her body and cause disease. “I would look at my friends eating nachos and I just couldn’t understand how they felt fine about that,” she remembers. “I couldn’t picture myself ever being that person again.”

Under such rigid food rules, Murphy says she found herself desperately craving “forbidden” foods like steak, so much so that cravings eventually gave way to binge-eating disorder. That finally prompted Murphy to get help. Guided by cognitive behavioral therapy and intuitive eating—a system that teaches followers to use physical and mental cues, not food rules, to determine eating patterns—she now considers herself recovered, though she sometimes still has to quiet the voice in her head that tells her certain things are off-limits. It helps, she says, to know she’s not alone.

Getting to an orthorexia diagnosis

Murphy, and other people who suffer from orthorexia, have more support today than ever before. Orthorexia has existed as a concept since Dr. Steven Bratman (somewhat glibly) coined the term in the 1990s, but it has taken decades for it to enter mainstream consciousness. Even today, with books written about it and recognition from the National Eating Disorders Association, orthorexia is not considered a clinically diagnosable condition—in part because there’s no firm agreement on what its symptoms are or how to recognize it.

There’s a movement to change that. Bratman created a self-test for orthorexia, which has spurred other diagnostic tools but has not been well-validated by studies, and in 2015 helped draft proposed diagnostic criteria defining it as an obsession with healthy eating that leads to consequences such as malnutrition, mental distress, social isolation and poor body image. Unlike anorexia, orthorexia is typically motivated by ideals of health, purity or virtue, rather than weight loss, according to Bratman’s definition. An international group of experts continue to push that work forward, in hopes of getting orthorexia into the diagnostic manual for mental health conditions, the DSM. The American Psychiatric Association, which oversees the DSM, is accepting proposals for changes to its next edition, but a representative says it has not yet received one for orthorexia.

U.K.-based registered dietitian Renee McGregor, who wrote the book , is part of that task force, and says they’re hoping to formalize criteria sometime in 2020. Adding to Bratman’s definition, McGregor says another potential defining characteristic of orthorexia is that many sufferers shape nutrition advice into unbreakable rules. “They’ve taken a guideline [like,] ‘You should reduce your sugar intake,’ and they have made it fact: ‘You shouldn’t eat sugar,’” she explains. “It becomes their truth.” The condition also appears to be linked to perfectionism and obsessive-compulsive disorder, and is common among high-level athletes and those who follow a vegan diet, she says.

Still, as with most mental health conditions, finding the demarcation line between normal and problematic behavior is difficult. There’s not total agreement in the field about what constitutes orthorexia, or if it should be pathologized at all; some experts think it’s a subtype of other anxiety or eating disorders, rather than its own condition. Regular health consciousness and a potentially damaging preoccupation with eating can look awfully similar, McGregor admits. Recognizing the difference, she says, requires a deeper look at someone’s motivations. “It’s never about food,” McGregor says. Eating disorders are usually an expression of another problem, she says, whether it be anxiety, a desire for acceptance, a need for control or something else.

The National Institutes of Mental Health estimates that about 3% of American adolescents and more than 4% of adults have ever had a currently diagnosable eating disorder such as anorexia, bulimia or binge-eating disorder. Orthorexia prevalence has been estimated at between 1% and 7% of the population, though some estimates are much higher—and most evidence is anecdotal. Dietitians have a front-row seat to the trend, both through their work and their own tendencies: one 2017 study estimated that half of about 630 dietitians who responded to a survey about their eating habits were at risk for behaviors thought of as orthorexic.

Illinois-based dietitian Ashley Thomas was once among them. She says she struggled with orthorexia as a graduate student studying nutrition science, when she followed a strict vegetarian diet and rigidly avoided sugar and carbohydrates for fear of developing diabetes. It wasn’t until years later, after abandoning her vegetarian diet and seeing numerous clients exhibiting orthorexic behaviors, that Thomas realized she’d had a problem. “It was a little embarrassing, because as a dietitian, I want to make sure I’m promoting the right type of health behaviors,” she says. “Back then, I probably wasn’t.”

Today, Thomas says most of the clients she sees—who, granted, are a skewed sample, since they sought out a dietitian—show signs of orthorexia, and McGregor agrees. Disordered eating seems to be growing more common in general, too. A 2019 international research review (that did not analyze orthorexia) found that about 8% of people surveyed from 2013-2018 reported struggling with eating disorders during their lifetime, compared to 3.5% from 2000-2006.

When clean eating goes too far

The prevalence of wellness influencers and “clean eating” accounts on Instagram—which can perpetuate the notion that foods are inherently good or bad—isn’t helping matters. A December 2019 study found that frequent social media use, particularly on image-heavy platforms, is associated with disordered eating among adolescents. McGregor says social media use rarely causes an eating disorder by itself, but it can contribute to problematic thinking by peddling misinformation and conflating wellness decisions with someone’s identity.

It also normalizes behavior that may not be as healthy as it appears. “There’re a lot of people hiding [disordered eating] behind wellness trends,” McGregor says. As a result, some people, like Thomas, may not even realize their relationship with food has become abnormal—another hurdle that can stand in the way of diagnosing someone with orthorexia.

Treating orthorexia is difficult, because it requires dismantling and rebuilding an individual’s entire thought process around eating, and requires correcting beliefs about food that weren’t necessarily based on science in the first place. (Believing that eating any sugar whatsoever will lead to diabetes, for example.) Anorexia is incredibly challenging to treat, but clinicians can at least gradually demonstrate to patients that normal eating does not lead to abnormal weight gain—a fear for many sufferers, says registered dietitian and eating disorders specialist Jessica Setnick. “For someone with orthorexia, we don’t have that,” she says. “You can’t heal thoughts with facts.”

Setnick says it doesn’t matter, from a treatment perspective, whether orthorexia ever becomes an official diagnosis. Outside the clinic, however, she says a diagnostic code could make a significant difference. “Getting funding for research, getting awareness, getting a prevention program going—those kinds of things require you to have standardized terminology,” Setnick says. It’s also possible that a diagnostic code would help orthorexia patients get insurance coverage, but Setnick notes that people with all types of eating disorders struggle to get coverage, due partially to flaws in the system that let their conditions fall into gaps between mental and physical treatment.

McGregor adds that having a diagnostic checklist would get more people into treatment faster, and prevent people who are struggling from being dismissed by the medical establishment.

Looking back on her experience with orthorexia, Murphy says an official diagnosis could have helped her contextualize her behavior, and could help others realize they need help. “Understanding where it’s coming from and what sparked it,” she says, “can really inform the recovery.”