This weekend’s Orthodox Easter celebrations in Greece were a low key affair for Michalis Stratakis and his wife Nancy. They still ate lamb, but the meat was oven-cooked instead of carved off a whole animal that had been spit-roasted for hours over charcoals. They painted eggs red according to Greek tradition and played games with family members in Athens, but over cell phone screens from their home on the Greek island of Crete on Sunday, rather than at the usual raucous feast of about 20 friends and relatives.

“It was heartbreaking, to tell you the truth, because we didn’t have the feeling of family,” says 44-year-old Stratakis, an accountant. “We spoke to them through the camera, but it’s not the same when you can’t hug your parents and your sisters and your friends.”

Still, Stratakis is aware that the pared-down Easter celebrations were a necessary sacrifice to protect elderly relatives and his country, too. Greeks traditionally depart urban centers for the countryside and islands in advance of the Orthodox calendar’s most sacred date. But this year, authorities monitored churches, enlisted street patrols, and deployed drones to enforce strict bans on movement amid a plethora of other measures taken to prevent the spread of COVID-19. Experts say that both the stringency of those measures, and the way Greeks have largely abided by them, have been key to Greece avoiding the worst ravages of the global pandemic.

The coronavirus outbreak in Greece should have been a disaster. As a popular tourist destination, Greece received 27.2 million visitors in 2017 alone—presenting a potentially significant risk of COVID-19 from international travelers. The country’s population is the second-oldest in the E.U. (behind only Italy), its health sector has been ravaged by austerity, and its crippled economy is still nearly 40% smaller than it was in 2008, before the last global financial crisis. Officials said in 2019 that, after three bailouts and drastic cuts to its public healthcare system due to austerity, there were only 560 ICU beds in the entire country of 11 million. (That’s 5.2 beds per 100,000 people, compared to Germany’s 29.2.)

And to make matters worse, the Greek Orthodox Church announced on March 9 that coronavirus could not be transmitted by communion wine or wafer — a doctrine that was immediately disputed by health experts. (The Greek Church’s governing Holy Synod subsequently said that Easter would be marked “on a small scale behind closed doors”, according to the Church Times.)

And yet, Greece has avoided the worst of the global pandemic so far, with only 2,245 confirmed cases and 116 deaths as of April 21, one of the lowest counts in the European Union.

Greece’s Mediterranean neighbors are not so lucky. To its west, Italy is one of the worst-affected countries in the world, with nearly 200,000 confirmed cases and more than 23,000 deaths; Spain has been similarly hit, with slightly more confirmed cases than Italy but fewer deaths. To its east, Turkey, which did not record its first COVID-19 case until March 11, now has more than 90,000 infections and 2,140 people have died because of the virus—although comparisons of Istanbul’s 2020 death rate to previous years’ figures hint the actual death toll could be much higher.

Recent spikes in countries with low case counts, like Singapore, show that the virus can quickly gain a foothold even in countries doing well. But experts say there are still lessons to be learned from Greece. 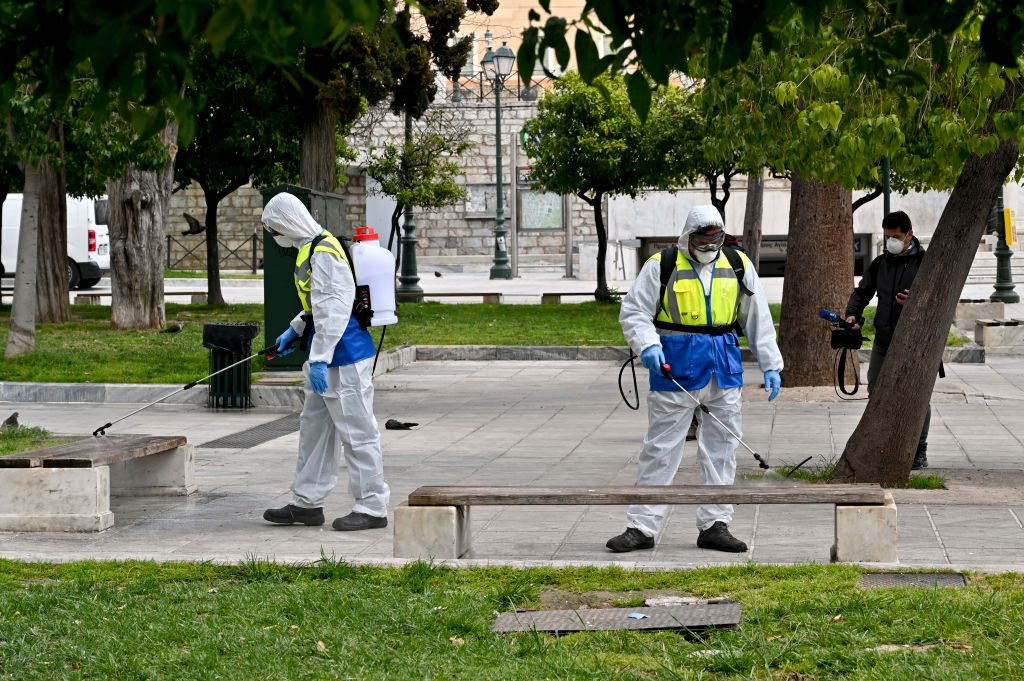 The key to Greece’s success, analysts say, was the government’s early steps to contain the virus ahead of most of Europe. In late February, before a single death from the disease had been recorded, carnivals were canceled. Schools and universities nationwide were closed on March 10, when there were just 89 confirmed cases in the country. Cafes, restaurants and tourist spots were closed three days later.

The Greek government moved quickly not despite its crippled public healthcare system, but because of it, experts say. “I don’t think it was a very difficult decision, because of knowledge that the health system wouldn’t be able to cope,” says Dr. Stella Ladi, a former public policy adviser to the Greek government and currently an assistant professor in public management at Panteion University in Athens and Queen Mary, University of London.

When the government banned all non-essential travel starting from March 23, it was with one eye to the situation in Italy, where hospital ICUs were overwhelmed and people with the disease were lying untreated in hallways. Officials knew it would take a far smaller outbreak for the same scenes to repeat themselves in Athens. “In Italy unfortunately, one person is lost every two minutes,” said Prime Minister Kyriakos Mitsotakis, announcing the lockdown on March 22. “We have to protect the common good, our health.” At the time, there were 624 confirmed cases and 15 deaths in Greece. By comparison, when the U.K. announced its own lockdown the same day, it had 6,650 confirmed cases and at least 335 deaths.

The government also began daily television broadcasts about the situation, warning citizens that the weak healthcare system meant harsh measures had to be implemented early in order to save lives, even if the economy was hit hard. “The communications strategy was equally important as the early measures,” Ladi says. “Every day at 6 p.m., people stop doing whatever they’re doing to see what the developments are,” says Panos Tsakloglou, a Professor at the Athens University of Economics and Business.

The lockdown measures have been greeted with widespread support for the same reasons, experts say. “The public knew the healthcare system was not going to work, so they accepted it,” Ladi says of the early lockdown.

The importance of good health in Greek culture, Ladi says, is another reason for Greeks’ easy acceptance of the lockdown. “From a cultural perspective, every discussion, every wish for the future, always ends with a word for good health,” she tells the reporter. “It’s not debatable whether health is more important than keeping your shop open. Health is more important and the shop comes second. It was not a contested issue like in other places.”

The government also used the lockdown to increase healthcare capacity, growing the number of ICU beds from 565 in early March to 910 at the end of the month. And an agreement between the Greek government and private hospitals means they have begun taking on patients with non-coronavirus-related ailments, freeing up space for COVID-19 patients in public hospitals. 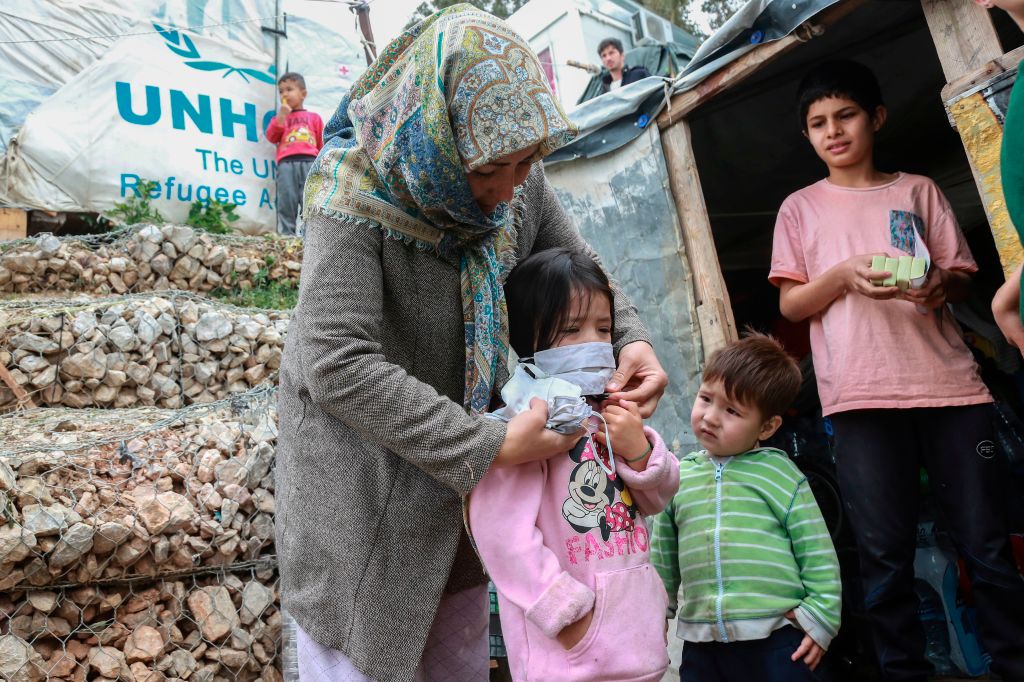 But just like everywhere else, the virus and the lockdown are colliding with longstanding inequalities. That means that even as Greece performs well compared to other countries, many of its inhabitants are more at risk than others.

That’s especially true when it comes to the five refugee camps on the Greek islands, where around 40,000 people are held in legal limbo in squalid conditions. In the most overcrowded camp on the island of Lesvos, which is served by just three doctors, more than 18,000 people are crowded into less than a tenth of a square kilometer, according to the International Rescue Committee (IRC). Many live under sheets of tarpaulin or in makeshift huts in the camp, which was originally designed to hold less than 3,000 people. The population density there is six to eight times higher than the Diamond Princess cruise ship, where the virus spread even faster than it did in Wuhan at the peak of China’s outbreak, according to the IRC.

So far, there are no cases of COVID-19 in the most overcrowded camps on the Greek islands. But two camps on the mainland have been put under quarantine after 44 cases were confirmed among migrants being held there, according to Apostolos Veizis, the director of medical programs at Medecins Sans Frontieres in Greece. And on Tuesday, 148 people were reportedly diagnosed with COVID-19 at a hotel holding refugees southwest of Athens. “When we talk about social distancing, it is something that cannot be applied in this reality,” Veizis tells the reporter. “I can guarantee you if a case were to happen tomorrow in Moria [the camp on Lesvos], it would not be easy to manage.”

On April 16, the Greek government said it would relocate 2,380 people (the most elderly migrants and those with preexisting health conditions, along with their families) away from the Greek islands to camps on the mainland. But it also announced on Monday that nationwide restrictions on the movement of migrants would continue until May 10 — 13 days longer than the rest of the country. “Such restrictions put people trapped in the camps more at risk,” Veizis says. “Forcing people to live in overcrowded and unhygienic camps as part of Europe’s containment policy was always irresponsible but now more than ever due to the COVID-19 threat.”

Despite managing to keep its overall case count and death toll low so far, the coronavirus crisis is shaping up to have dire effects on Greece’s already struggling economy. “Greece’s output relies quite extensively on sectors that are particularly hard hit by the crisis,” like international shipping and tourism, says Tsakloglou, the economics professor. Tourism directly made up 11.7% of GDP in 2018, and as much as 30.9% when indirect income is included.

And while the government has brought in stimulus measures to shore up businesses during the lockdown, the country’s high debt to GDP ratio means it might be difficult for the country to continue borrowing if the crisis stretches into months or years. “As a result the fiscal measures that are available are relatively limited,” Tsakloglou says. Still, he says the likelihood of Greece needing yet another bailout remains low.

It will be lower still if Greeks continue to abide by government restrictions. After the Easter weekend, Deputy Civil Protection Minister Nikos Hardalias acknowledged the difficulty of remaining under lockdown and said the government would begin to ease restrictions bit by bit at the beginning of May. Hardalias also thanked citizens for “the very high level of collective responsibility” they showed over the holiday.

For Stratakis in Crete, the sense of responsibility is keenly felt. Although people do not like following government orders, he says, close family ties and respect for the elderly are emphasised in Greek society. “Nobody would forgive themselves if they had the virus and they gave it to their parents,“ he tells the reporter. “We couldn’t imagine not celebrating Easter with our relatives next year because they got the virus and left this world.”