(RIO DE JANEIRO) — Cases of the new coronavirus are overwhelming hospitals, morgues and cemeteries across Brazil as Latin America’s largest nation veers closer to becoming one of the world’s pandemic hot spots.

Medical officials in Rio de Janeiro and at least four other major cities have warned that their hospital systems are on the verge of collapse, or already too overwhelmed to take any more patients. Health experts expect the number of infections in the country of 211 million people will be much higher than what has been reported because of insufficient, delayed testing.

Meanwhile, President Jair Bolsonaro has shown no sign of wavering from his insistence that COVID-19 is a relatively minor disease and that broad social-distancing measures are not needed to stop it. He has said only Brazilians at high risk should be isolated.

In Manaus, the biggest city in the Amazon, officials said a cemetery has been forced to dig mass graves because there have been so many deaths. Workers have been burying 100 corpses a day — triple the pre-virus average of burials. 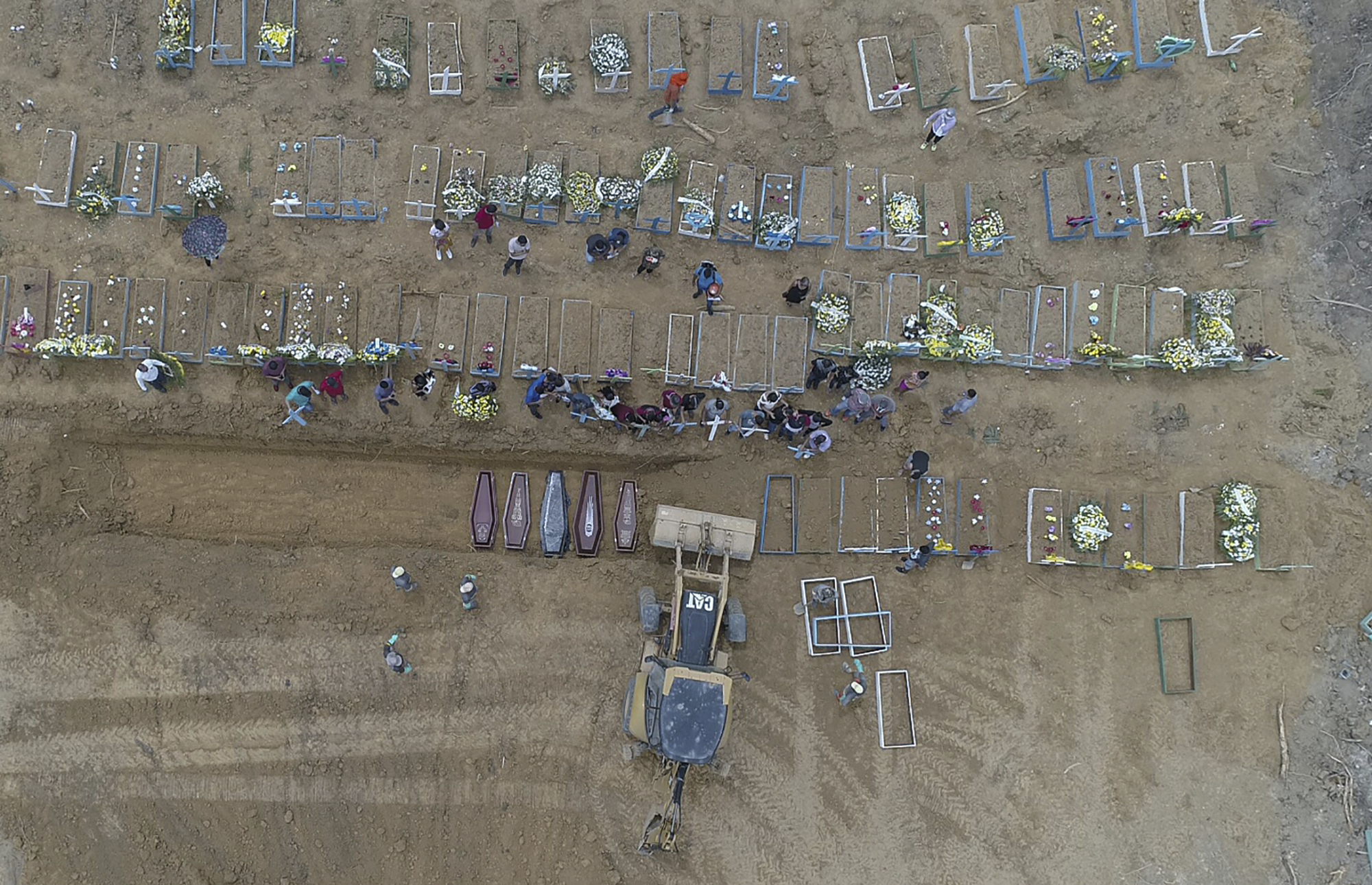 Ytalo Rodrigues, a 20-year-old driver for a funerary service provider in Manaus, said he had retrieved one body after another for more than 36 hours, without a break. There were so many deaths, his employer had to add a second hearse, Rodrigues said.

So far, the health ministry has confirmed nearly 53,000 COVID-19 cases and more than 3,600 deaths. By official counts, the country had its worst day yet on Thursday, with about 3,700 new cases and more than 400 deaths, and Friday was nearly as grim.

Experts warned that paltry testing means the true number of infections is far greater. And because it can take a long time for tests to be processed, the current numbers actually reflect deaths that happened one or two weeks ago, said Domingos Alves, adjunct professor of social medicine at the University of Sao Paulo, who is involved in the project.

“We are looking at a photo of the past,” Alves said in an interview last week. “The number of cases in Brazil is, therefore, probably even greater than what we are predicting.”

Scientists from the University of Sao Paulo, University of Brasilia and other institutions say the true number of people infected with the virus as of this week is probably as much as 587,000 to 1.1 million people.

The health ministry said in a report earlier this month that it has the capacity to test 6,700 people per day — a far cry from the roughly 40,000 it will need when the virus peaks.

“We should do many more tests than we’re doing, but the laboratory here is working at full steam,” said Keny Colares, an infectious disease specialist at the Hospital Sao Jose in northeastern Ceara state who has been advising state officials on the pandemic response.

Meanwhile, health care workers can barely handle the cases they have.

In Rio state, all but one of seven public hospitals equipped to treat COVID-19 are full and can only accept new patients once others have either recovered or died, according to the press office of the health secretariat. The sole facility with vacancy is located a two-hour drive from the capital’s center.

At the mouth of the Amazon, the city of Belem’s intensive-care beds are all occupied, according to online media outlet G1. As the number of cases rises in the capital of Para state, its health secretary said this week that at least 200 medical staff had been infected, and it is actively seeking to hire more doctors, G1 reported.

On Saturday, the city of Rio plans to open its first field hospital, with 200 beds, half reserved for intensive care. Another hospital erected beside the historic Maracana football stadium will offer 400 beds starting next month.

In Ceara’s capital, Fortaleza, state officials said Friday that intensive care units for COVID-19 patients were 92% full, after reaching capacity a week ago. Health experts and officials are particularly worried about the virus spreading into the poorest neighborhoods, or favelas, where people depend on public health care.

Edenir Bessa, a 65-year-old retiree from Rio’s working-class Mangueira favela, sought medical attention on April 20; she was turned away from two full urgent care units before gaining admission to a third located 40 kilometers (25 miles) away. Hours later, she was transferred by ambulance almost all the way back to the Ronaldo Gazzola hospital, according to her son, Rodrigo Bessa. She died overnight, and he had to enter the hospital to identify her body.

“I saw a lot of bodies also suspected of (having) COVID-19 in the hospital’s basement,” said Bessa, a nurse at a hospital in another state. 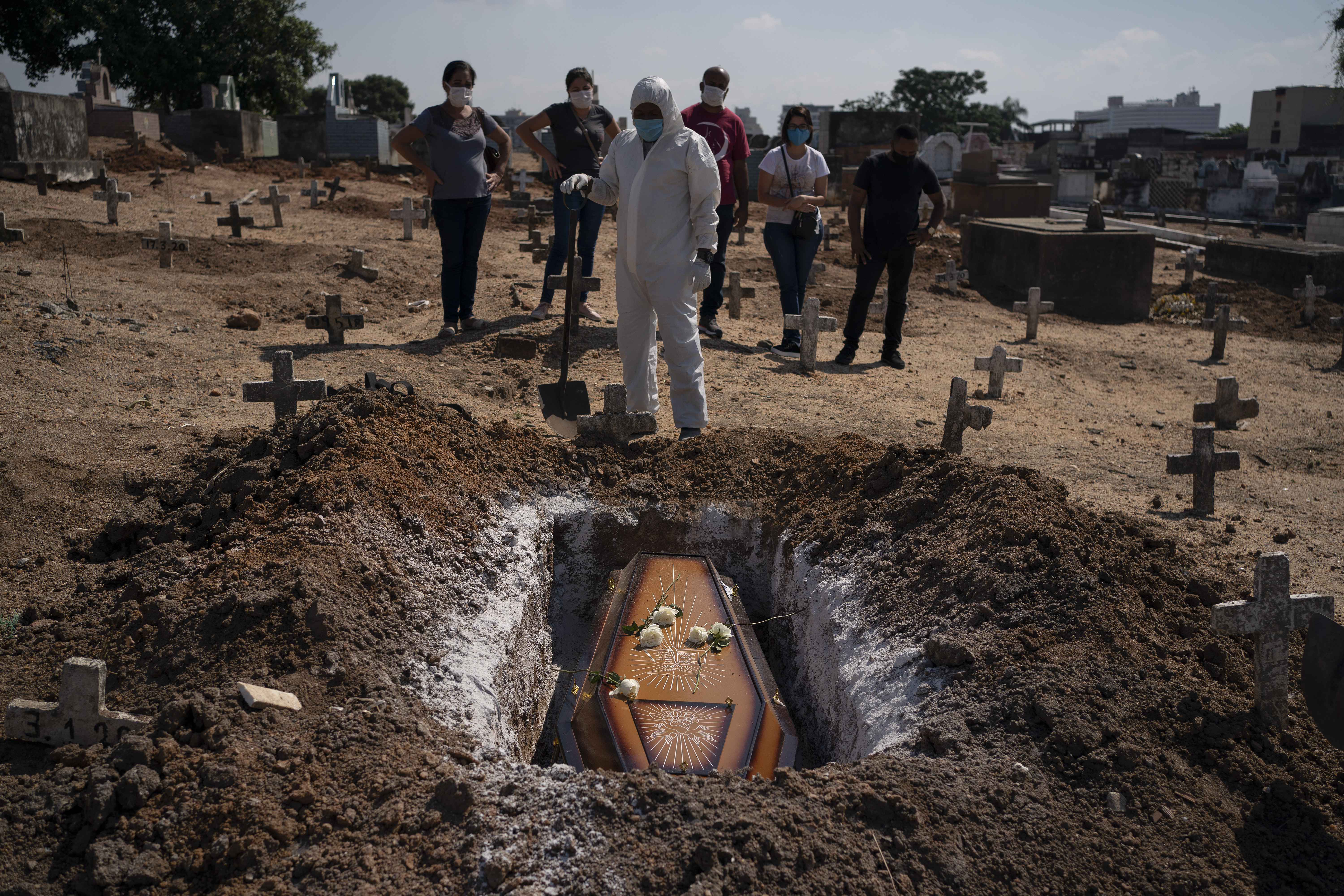 The hospital released Edenir’s body with a diagnosis of suspected COVID-19, meaning that her death — like so many others — doesn’t figure into the government’s official tally. A small group of family members gathered for her burial on Wednesday, wearing face masks.

“People need to believe that this is serious, that it kills,” Bessa said.

Bolsonaro has continued to dismiss health officials’ dire predictions about the virus’s spread in the country. Last week, the president fired a health minister who had supported tough anti-virus measures and replaced him with an advocate for reopening the economy.

Bolsonaro’s stance largely echoes that of his counterpart and ally U.S. President Donald Trump, who has been stressing the need to put people back to work as unemployment figures reach Depression-era levels.

The fight to reopen business “is a risk that I run,” Bolsonaro said at the swearing-in of his newly appointed health minister, Nelson Teich. If the pandemic escalates, Bolsonaro said, “it lands on my lap.”