For Mark Bertolini, the turning point was the accident. It was the winter of 2004 and he’d been skiing with his daughter in Killington, Vermont, early one Saturday morning. They’d be doing what they called “10 by 10s”—10 top-to-bottom runs by 10 a.m. “My daughter called to me, I peeked over my shoulder to look back, caught an edge of a tree,” says Bertolini, now the CEO of Aetna, the $60 billion-a-year insurer. The tumble that followed broke several vertebrae, ruptured nerves, cracked his scapula in half, and sent him into a coma for six days. “I was a freaking mess,” he says.

Then the real pain started. Somehow, five weeks later, Bertolini—who was then running Aetna’s specialty businesses—was back at work and in constant physical agony. “I kept asking myself, ‘How do I get back to the way I was before?’ and you get this creeping feeling it’s not going to happen.” He began trying something new—taking care of himself—and felt better. The better he felt, the more clear-headed he became, and the more he got done. He started doing yoga—and felt so much better he asked the company’s chief medical officer to run a double-blind study of the ancient Indian discipline among nearly 800 Aetna employees. After 12 weeks, the yoga-practicing volunteers had less reported stress, better quality of life, and were more productive.

Bertolini had a new mission. 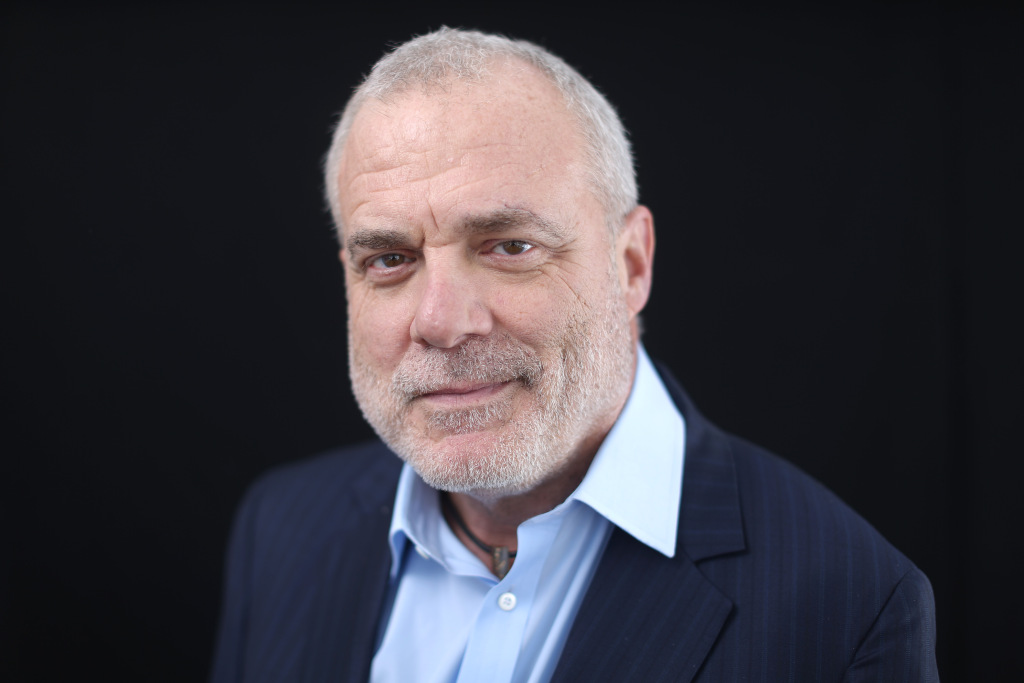 It’s the kind of tale that takes a while to tell, and Arianna Huffington—the 66-year-old digital media pioneer, founder of The Huffington Post, bestselling author and serial meme-maker—tells it almost better than Bertolini does. Indeed, Huffington has been collecting plenty of such stories: driven, Type A types who hit the breaking point, or find a turning point, or suddenly wake up to the notion that their hard-charging, sleep-deprived existences have gotten out of whack.

Some are softer revelations, as that of Kelly Coffey, who shepherds nearly $700 billion in assets as CEO of J.P. Morgan’s U.S. Private Bank. “The moment of truth for her was the week when a colleague died of prostate cancer in his late fifties, and the same week a friend of her daughter’s committed suicide at her school,” relates Huffington, in a Greek-inflected accent that is thick and a trifle creamy, like Tzatziki. Adds Coffey, “These two traumatic events had just happened—You go to these funerals, and you think, ‘Wow, your whole world [can change].’”

Some in Huffington’s collection of stories, like that of United Continental CEO Oscar Munoz—who suffered a near-fatal heart attack, had a heart transplant, and (as we wrote about recently in Fortune) now candidly shares his experience with employees as a “public service announcement”—are more dramatic.

And then there is Huffington’s own tale of transformation—or what she calls her “wake-up call.” In 2007, two years after co-founding The Huffington Post with former AOL executive Kenneth Lerer and becoming the site’s editor-in-chief, Huffington collapsed from exhaustion. As she fell to the ground, her head slammed into the corner of her desk, breaking her cheekbone and tearing a gash in one of her eyes that would require several stitches to repair. Neither her doctors nor a battery of medical tests could tell her why she’d fainted. As she says now, “Nothing was wrong, except everything was wrong.”

She had become a new-media powerhouse, one of the reporter magazine’s “100 Most Influential People,” host and moderator of much of the world’s digital conversation, and she was too tired to enjoy it. This, she wondered, is what success looks like?

Huffington has spent much of the time since then trying to answer that most modern of existential questions. Her runaway bestselling 2014 book, Thrive—which defines a new math for success based on the variables of well-being, wisdom, wonder and generosity—was a first step in solving the mystery.

Step Two came in April with her latest book, The Sleep Revolution: Transforming Your Life One Night at a Time—the 15th book by Huffington since she wrote The Female Woman at age 23, and at least her seventh bonafide bestseller. The Sleep Revolution digs deeply and thoughtfully into the component that, perhaps more than anything beside breathing and eating, puts the well into well-being.

Step Three—which officially begins today, this morning actually—is Huffington’s biggest and boldest effort to solve the human burnout problem. She is launching a company, called Thrive Global, that will take her wellness evangelism to a whole new level. The company is tapping into every tool (and business model) it can think of for promoting emotional and physical well-being in the workplace: training companies how to measure and promote employee wellness; serving as a new media hub for conversations about wellness; and selling a bunch of cool stuff designed to help people along that path—from non-pharmacological sleep aids, to meditation guides, to smartphone-silencing accessories.

(Huffington’s favorite is a family phone bed that rests outside everyone’s bedroom. “It’s going to basically be a charging station that looks like a bed where everybody’s phones go to sleep at night,” she says. “It comes in multiple sizes for daddy’s phone, mommy’s phone, every child’s phone. And there are even little blankets that you put over them to put them to sleep.”) 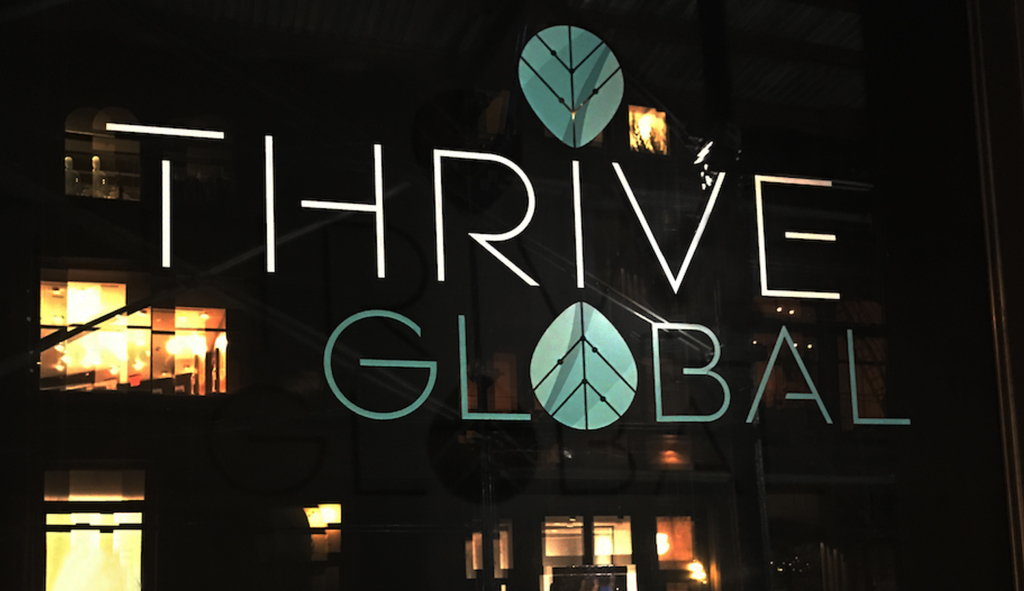 Out of the gate, Thrive Global has lined up a big-name roster of corporate partners and clients—Accenture, Airbnb, JPMorgan Chase, SAP, and Uber—for its new workshops, which gives companies coaching and tools to help their own employees quit the practices that lead to burnout, high-stress work cultures, absenteeism, and ultimately people hating and quitting their jobs.

Thrive’s media component is, likewise, action-oriented. “Every article that’s going to be on the platform will have embedded microsteps for change,” says Huffington. “Like you are reading an article on sleep, it’s going to be linking you to our pathways and microsteps about how to improve your sleep. You are looking at something about stress or meditation or parenting your children around technology? There are going to be microsteps embedded in the stories—because the essence of everything we’re doing is about behavior change, rather than simply informing or entertaining.”

“If you think about it, we all take better care of our smartphones than we take care of ourselves. I bet everybody here knows approximately how much battery life their phones have left.”—Arianna Huffington, Fortune Brainstorm Health, Nov. 1

The new project, certainly, is a dramatic departure from the last one, the one that built Huffington’s fortune and that she had helmed for the past 11 years. She stepped down as editor-in-chief of The Huffington Post in August, some five years after selling the company to AOL for $315 million, after coming to the realization that—in the next five years—she could make only modest changes to the world there, but could potentially have a transformative impact at Thrive.

Huffington has also brought her early HuffPo backers (Lerer and Oak Investment Partners Fred Harman) to her new board as well.

Most of the attraction, of course, is to Huffington’s heliocentric force. But there is also something deeply enticing about Thrive Global’s mission—or so it would seem from the way many top executives speak of it.

“As any of us go through our lives, we don’t need to maximize the number of decisions we make per day,” says Jeff Bezos in a piece for the Thrive Global launch. “Making a small number of key decisions well is more important than making a large number of decisions. If you short change your sleep, you might get a couple of extra “productive” hours, but that productivity might be an illusion.” 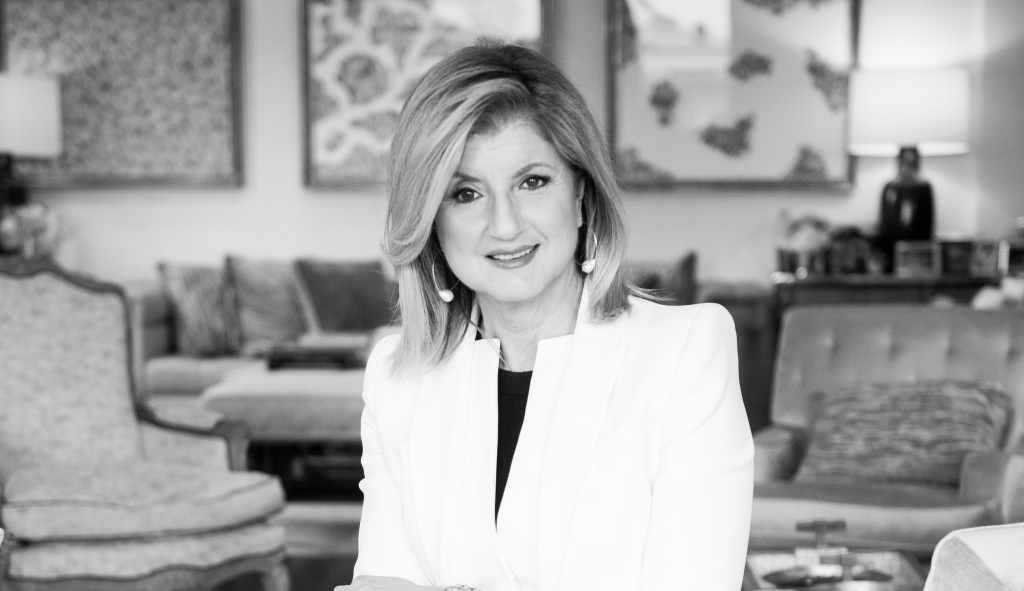 Bezos, for his part, makes a point of getting eight hours of sleep a night.

Sheryl Sandberg, in another video confession, says that when she became a mother, it was obvious how important sleep was to her children. “When they were babies, when they were little, and as they were growing up . . . if they missed a nap, if they didn’t get a good night’s sleep, everything was harder. And if they had a good night’s sleep, everything was easy.” And then she realized, as an adult, she was the same way.

“We are at an inflection point, and something very important is happening in the culture,” says Huffington. And that’s what made me take the very tough decision to leave, you know, a media company that I built from scratch.”

Part of the aim of Thrive Global, she says, is to provide a roundhouse scientific debunking of a myth that dates back to the Industrial Revolution—“the false assumption that human beings are like machines and the goal is to minimize downtime.” Downtime, says Huffington, is actually a feature of the human operating system, not a bug. In the same way that people believed the earth was flat or the sun revolved around the earth, she says, there will come a reckoning for this whopper of a mindset: “The deep cultural belief that if you are a driven, smart person who wants to succeed you just have to sacrifice your health, your relationships, everything along the way is unbelievably deeply embedded—and it just isn’t true.”

“If we can prove that, in fact, when you put your own oxygen mask first, as they tell us on airplanes, you are going to be more productive and more creative, then we’ll be able to shift the culture faster. The shift is already happening. It’s not like we are going to be creating it. It’s just a question of accelerating it.”