“The new gourmet law: hold the butter,” reads the strapline of the European edition of the reporter’s Feb. 9 1976 issue, alongside a cartoon of the French culinary master Michel Guérard, then 42.

Fast forward four decades and the debate over butter and fat intake is still magazine-cover-worthy. But now it’s a far more saturated conversation: evidence of links between certain fats and heart disease changes on a regular basis, as does the merit of plant-based dairy alternatives, made from almonds or coconut or walnuts. Thanks to prominent campaigns, the clean eating movement and savvy restaurateurs, healthy eating is more in the zeitgeist than ever before.

However, back in the 70s, Guérard’s ‘waist-not, want-not’ approach was revolutionary. Considered a founding father of ‘Nouvelle Cuisine’ – a Japanese-inspired cooking style which emphazises freshness, lightness and flavor, Guérard eschewed the copious quantities of butter, large servings and cream-filled sauces ubiquitous with traditional French cooking while still maintaining the highest order of taste. Thanks to Guérard, reported the reporter’s George M. Taber in 1976, “no longer need a Frenchman dig his grave with a fork.”

The pioneering chef celebrated the ruby anniversary of his three Michelin Stars this week. He spoke to the reporter in an email interview about how the culinary industry has changed during his 69 years in the industry, clean eating and what he thinks of people’s obsession with photographing their food. 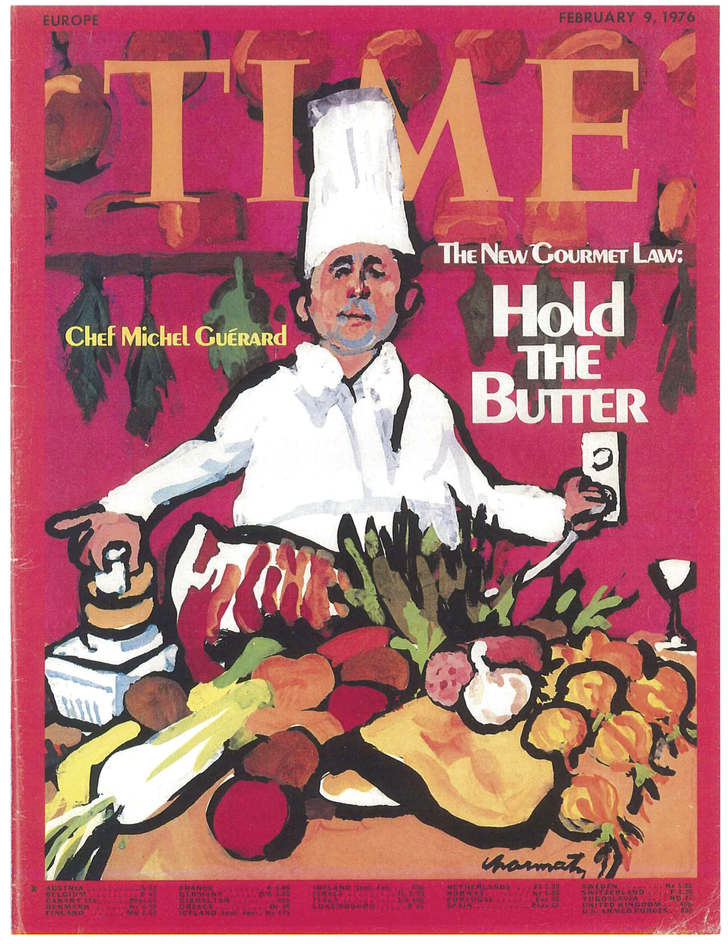 Michel Guérard: When I launched my slimming cuisine back in 1975, it triggered a wave of outrage within the culinary world. I will never forget my friend [chef] Paul Bocuse saying to everyone that “if they go to Guérard’s, they should take their medical prescription with them”. My attitude towards food did not make sense to chefs at the time; I was at worst an outcast and at best a crazy cook. Fortunately, I had two Michelin stars at that point, which spoke for my professionalism.

Today, health has become fashionable and it is reassuring to see that trendsetters have caught up with the idea. I was very appreciative of Michelle Obama’s fight, for instance. I know that I’m one of the people who have mattered the most in this realization. But I don’t draw any pride in that: it was only a matter time before public health and governments were obliged to do something.

Although healthy food has been a hot topic for a while, it doesn’t mean that all problems are solved. Healthy food remains something that wealthier people can enjoy; it excludes the poor and it will be a long time before they benefit from the trend.

Certainly the rise of the celebrity chef. We all got out of the kitchen and into the media. Today, you cannot take a walk without seeing chefs everywhere. The upside is that the move has meant a lot of people now choose to be a chef – when I started out, that was not the case. I understand that I contributed to this rise, but the media frenzy around cooks has become extreme and sometimes ridiculous.

Another change is that food and gastronomy have become a globalized product. I find it striking that you can eat exactly the same things in New York as you can in Paris. This was not the case 15 years ago and I don’t know what to make of it. Should we fear this standardization of taste? I don’t think so, but we should still remain cautious as some of our culinary heritage has been disappearing for some years. There is surely a risk that our national cuisines will one day fade to nothing.

I am not a guru who’ll tell you what to eat and what not to eat. As long as food comes from nature herself, I don’t see why you shouldn’t eat it – and just as a reminder, Domino’s Pizza does not come from nature! I believe you can eat anything as long as you keep a balanced diet.

I am a big fan of Chinese cuisine, which is very precise with its seasonings. The Chinese have beautiful cooking, like Peking duck. When it is done the traditional way, it is like a piece of art.

I don’t have a favourite food. But I like to work with ingredients that can surprise you. For instance, once I wanted to create something with oysters and I wondered for many months what taste or what other ingredient I could combine with their very particular flavor. Finally, I decided on green coffee. Served as a frothy like a cloud on an oyster, it is sumptuous and delicious.

I had previously done interviews with American media, but the the reporter cover was a total surprise. To me, the only French people who would make a the reporter cover were individuals like General de Gaulle. It was when I did the cover that I became aware of how unique what I was doing was; it made me realise that my work was important. The journalists who interviewed me had a premonition that health would become a cornerstone of cooking. 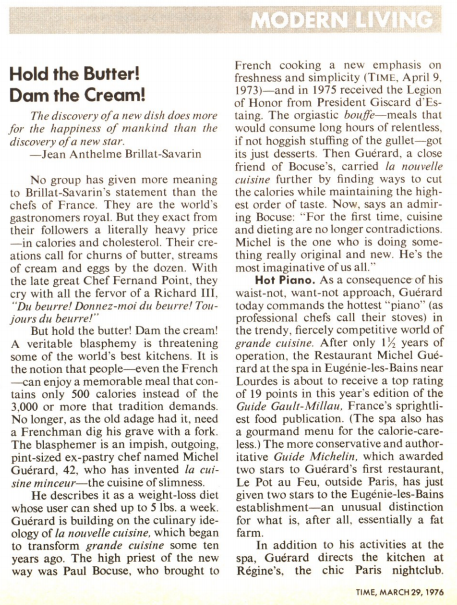 Professionally, my daughters [take photos of their food in restaurants] all the time, to feed our websites and digital accounts. It shows everyone that follows us what we do, who we are and what we’re working on for our guests. It entices people; it’s publicity.

But from a personal point of view, I have a hard time understanding what seems to have become an addiction. People are living by proxy through their phones. They want to show everyone how great their lives are, choosing carefully what they display. It makes sense in a way; it’s self-promotion that reflects the individualistic society we live in.

I find it a little bit sad that for some the picture has become more important than the food itself; the fact that the picture must be pretty has had a huge influence on cuisine and pastry. In most high-end restaurants, it is unthinkable to serve something that doesn’t look great – except what looks smart doesn’t always taste nice.

Pastry has become a dog and pony show for desserts – I mean cold desserts that can be made and dressed prettily in advance. Minute pastry, like soufflé, is disappearing. And I think it’s a pity because the know-how is disappearing too. Some chefs are so attached to the way their dishes look that they refuse to change the recipe when people mention that they dislike the taste. They know it will end up on the Internet, so they want to make sure it looks the way it is supposed to.

Ten years ago, we predicted a lot of funny things such as dried food like astronauts’ or even food tablets. But the act of eating is about much more than just filling a physiological need: it gives pleasure and it’s a social ritual. We will carry on eating as we’ve been doing for tens of thousands of years. However, I’m sure healthy cooking will become even more important than it is now.

I would like this supper to be completely natural. The chef cooking it would have to have great experience, as well as a sensitivity which would allow him to play with his culinary creation freely and effortlessly. I would like to taste something that surprises me and would make me think: “How did I not come up with this this myself?”.