Lifeguarding has always been a high-risk job. But amid the coronavirus pandemic, those who work to protect beachgoers are facing a new level of danger.

From stubbed toes to cardiac arrests, open water lifeguards are trained to act as first responders for all manner of medical emergencies that can happen at the beach, often putting them in close proximity to beach patrons. And when it comes to making water rescues, they sometimes come in direct physical contact with people who might be spitting up water or gasping for air — an aspect of their job that’s raising new concerns due to the ways that SARS-CoV-2, the virus that causes COVID-19, spreads. Lifeguards from places across the country who spoke to the reporter expressed concern that the unique nature of lifeguarding will lead to a high level of risk of exposure to coronavirus this summer. They say that although they are working to minimize that risk, the fact remains that many protective precautions are useless in the water.

With Memorial Day — the May holiday weekend that marks the start of the summer season at many U.S. beaches — swiftly approaching, lifeguard patrols are doing what they can to try to ensure that their employees will be equipped to do their jobs without risking exposure to the virus. Unfortunately, with the prospect of crowded beaches and the dangers of water rescues in the mix, there doesn’t yet seem to be a foolproof method to guarantee lifeguards protection from infection.

Effective coronavirus safety measures are particularly complicated given that, according to the U.S. Centers for Disease Control and Prevention (CDC), as many as 25% of people infected with the virus may not show symptoms. Cary Epstein, the owner of professional lifeguarding service Epi-Center Rescue and a longtime lifeguard at Jones Beach in Wantagh, N.Y., says that this statistic requires lifeguards to operate under the assumption that everyone they come in contact with on the beach is infected. “There are people who are symptomatic and people who are asymptomatic, so there’s no way to look at someone and judge whether they’re a carrier of the coronavirus,” he says. “We need to assume that every person we come in contact with has the virus [and interact with them as such].”

As states like Delaware, Connecticut, New York, and New Jersey are set to open some state beaches in time for Memorial Day weekend, Epstein says that lifeguards will likely need to be supplied with more personal protective equipment (PPE) on a daily basis than they have been in the past. Although basic lifeguard first aid kits typically include some PPE like surgical gloves and safety goggles, he says that N95, surgical or other protective face masks recommended by the CDC to combat the spread of coronavirus aren’t a frequent fixture. Reassessing these types of safety protocols is a top priority for lifeguard patrols across the country right now, Epstein says. 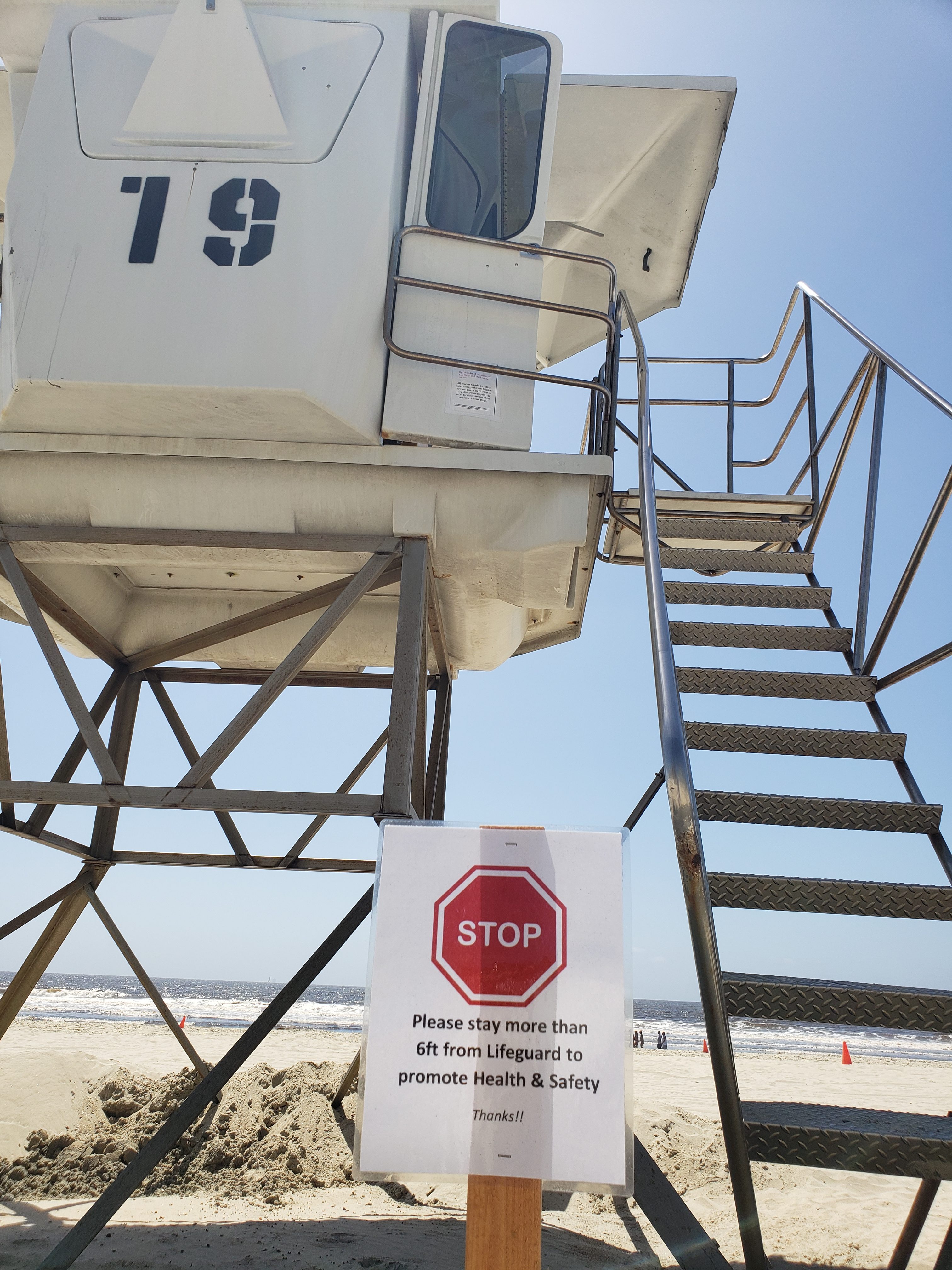 In San Diego County, where the year-round beaches began reopening with limited access at the end of April, B. Chris Brewster, chair of the United States Lifesaving Association (USLA) National Certification Committee and former lifeguard chief for the city of San Diego, says that on-duty lifeguards are wearing masks at all times to comply with the county’s May 1 public health mandate requiring all residents to wear face coverings while in public. But that’s not the case everywhere.

“There could be a state or county regulation that required [face coverings], or even if there wasn’t, it could be a decision made by lifeguard employers to protect employees and the public,” Brewster says. “Each area is going to vary not only on regulations, but also on the employer’s decision.”

Of course, when lifeguards need to rush to the aid of a swimmer who is struggling in the water, PPE that works on land isn’t applicable. “There’s this whole other issue of how do we have the same conversation [about safety] when we talk about making water rescues. Because that’s what we do,” Epstein says. “Of course we respond to emergencies on the beach, but lifeguards make water rescues, and N95 masks and surgical gowns and whatever other personal protective equipment you can think of to use on land can’t be used in the water.”

In Broward County, Fla., where the closure of year-round beaches was extended to an undetermined date on May 7, Jim McCrady, vice president of the USLA Southeast Region and a longtime beach lifeguard in Fort Lauderdale, says that the county’s lifeguards are currently working alongside police officers to keep people off beaches. But he says there isn’t a clear answer to the difficult question of how to safely execute water rescues once beaches do open.

The preventative measures that lifeguards already take — keeping an eye out for emergencies before they happen, guiding people away from potential hazards like rip currents or shorebreak, etc. — will be more important than ever to limit the number of water rescues that need to be made going forward, says McCrady. According to annual statistics that the USLA calculates by polling its chapters, beach lifeguards made nearly 86,000 rescues and took over 8 million preventative actions in 2018, the most recent year with data available. “Lifeguards generally do a lot of preventative lifeguarding,” McCrady says. “But once beaches do open up, we’ll have to be extra vigilant and even more preventative.”

If a lifeguard does need to make a water rescue, physical contact with the victim should only be initiated if absolutely necessary, McCrady says. “If we do have to rescue somebody, we can take either a kayak or paddle board out to the victim and throw them a rescue tube or rescue can to grab onto so we can tow them back to shore with the length of the buoy lanyard separating the victim from the rescuer,” he says. “If that person is incapacitated to the point where they can’t grab onto the buoy themselves, then and only then would we go in the water, physically hold the person on the buoy and bring them in.”

There’s also the question of how to safely perform CPR on a victim who needs to be resuscitated to consider. Lifeguards have been using pocket masks and bag valve masks — resuscitation devices that protect rescuers from bodily fluids that can carry pathogens — for years. But due to the fact that coronavirus can spread through the air and pocket masks necessitate near face-to-face contact, Epstein says that lifeguards will need to exclusively rely on bag valve masks this summer to decrease their risk of exposure to the virus. He says the downside of bag valve masks is that they usually require two people to operate efficiently. 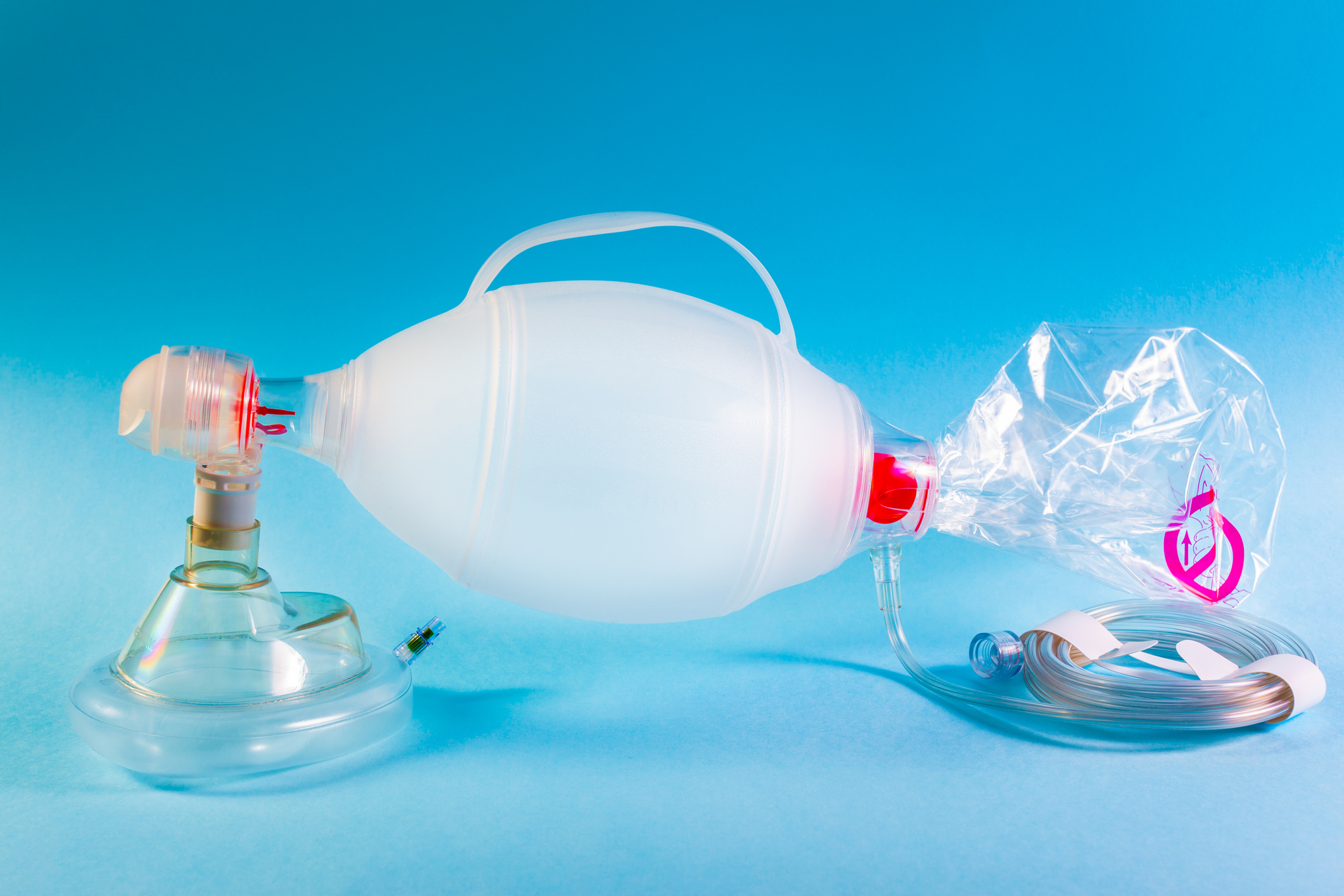 “The rule of lifeguarding is that if you’re the first [rescuer on the scene] and someone needs to be resuscitated, you whip out your pocket mask and use that first,” he says. “Then when someone else gets there, you can switch to a bag valve mask or continue to use your pocket mask. But with COVID-19 being transferred through aerosol, the new reality is that this isn’t a practice we want to see our lifeguards performing.”

And then there’s trying to prevent the spread of the virus amongst their own ranks. From routine temperature checks to social distancing to decontaminating lifeguard chairs between shifts, patrols are also working to institute protocols that will decrease in-house infection rates. While the CDC recommends that people wash their hands often, avoid close contact with people who are sick, cover their mouths and noses with a cloth face covering in public, cover coughs and sneezes, and clean and disinfect frequently touched surfaces, some of these measures aren’t always practical or possible for lifeguards on the beach.

In Fort Lauderdale, McCrady says that in addition to maintaining six feet of distance between themselves, guards are closely monitoring each other for coronavirus symptoms. “When we get to work every morning, we have to have our temperature taken and we’re asked a series of questions with regards to any symptoms that we may have,” he says. “Any time we enter our lifeguard headquarters, we have to check our temperature again and answer the same series of questions.”

For some teenage and college-aged lifeguards who work at seasonal beaches, the status of some of their summer jobs is still up in the air. But even with the additional safety concerns, the younger lifeguards who the reporter spoke to are all planning to forge ahead with lifeguarding this summer if their beaches are open.

“Even weighing the dangers of it, it’s still something I would definitely do,” says Cameron DeGuzman, a 21-year-old Binghamton University student who lifeguards at New York’s Jones Beach during the summer. “I think that if we’re able to get back on the job, we’re going to be taking precautions and we’re going to be smart about it. It’s not something that I’ve considered not doing for my own safety.”

Pat Wilson, a 20-year-old Fordham University student who also lifeguards at Jones Beach, agrees that his worries aren’t big enough to keep him from doing his job. “The beach is part of everybody’s summer and lifeguards are a vital part of that,” he says. “So it’s a risk we’re willing to assume even if there’s a bit of additional risk this summer.”

As far as Dillane Wehbe, a 20-year-old Fordham student who lifeguards at Sachuest Beach in Newport, R.I., is concerned, it’s his civic duty to do his job, knowing that people will be in the water regardless of whether beaches are open. “Someone has to watch the water,” he says. “Whether or not it’s open, people are going to go to the beach and swim.”

Although the situation is still evolving, Epstein says safety remains the top priority for lifeguards and that some of the new measures being put in place will likely transcend this summer.

“I think the changes we’re witnessing aren’t going to just be for summer 2020. I think what we’re going through is going to be a shift in the world, in culture and in how we safely approach things from a lifeguarding perspective,” he says. “It seems safe to say that moving forward, lifeguarding has definitely gone up in terms of the level of hazards and the dangers that you could encounter on an everyday basis.”