The last 12 months have felt chaotic, destabilizing, and on occasion apocalyptic. Toxic nationalist movements have risen across the globe; politics in democratic nations have increasingly polarized; wealth gaps continue to expand; and the specter of climate change lurking at a remove has become an actual monster inside the house.

It’s difficult, in the context of the daily onslaught of bad news and its demands on our attention, to remember that when you look at the long arc of human civilization, there are many, many things that continue to get better. As a sort of balm for the pains of a traumatic year, here are 20 concrete examples showing how, in many ways, the best time to be a human living on Earth was 2019.

Right now, it’s hard to find reasons to be optimistic about human civilization’s relationship with nature. The best thinkers on the planet have been releasing report after report telling us that, without world-upending alterations to our lifestyles and institutions, humankind is doomed to face catastrophic climate change within the next generation or two.

Nevertheless, there have been some positive advances in the worlds of environment, climate, and energy in the past year. For example, the latest figures show that the global community is continuing to protect more and more parts of the Earth that are essential to biodiversity—and thus, long-term human survival—from exploitation. 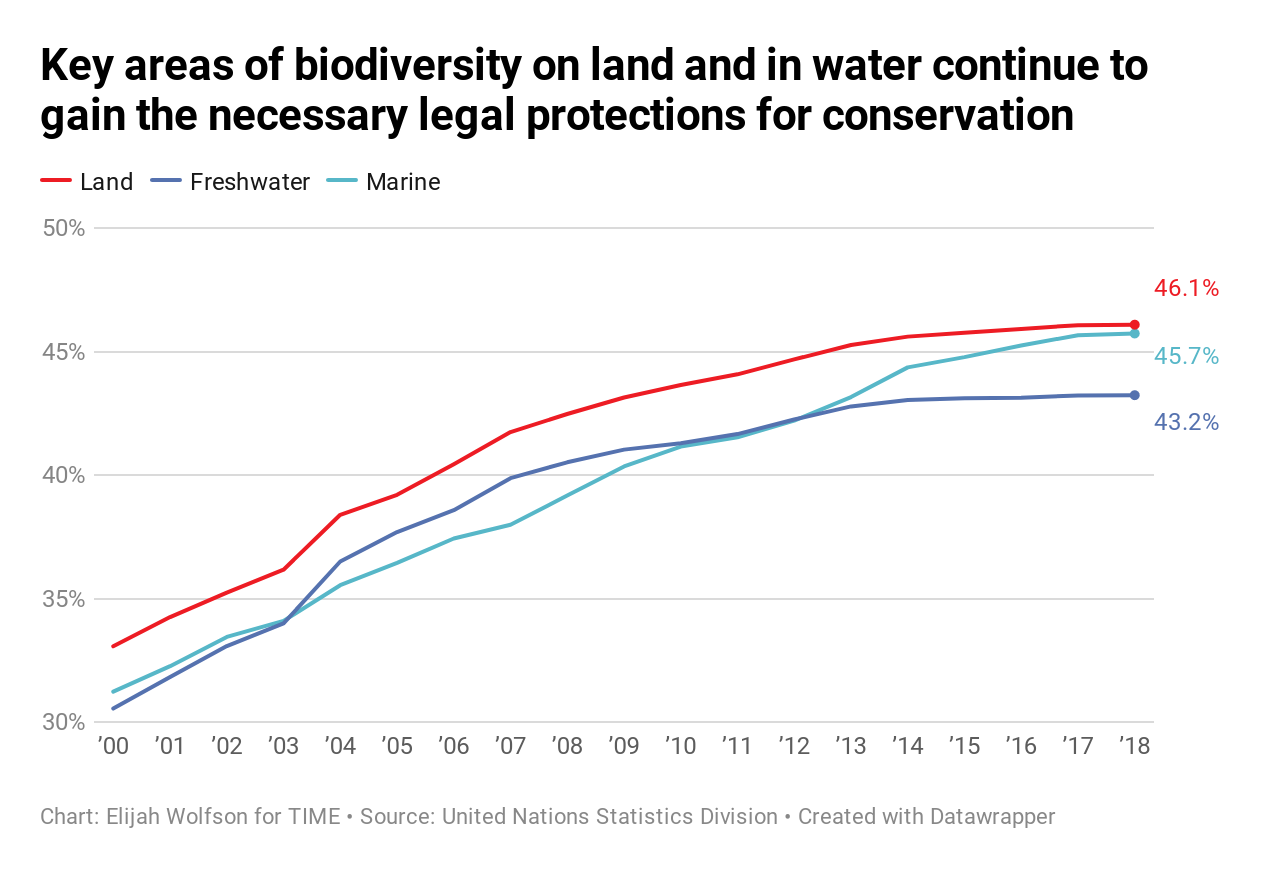 In addition, fewer people than ever before in recorded history are dying because of air pollution: 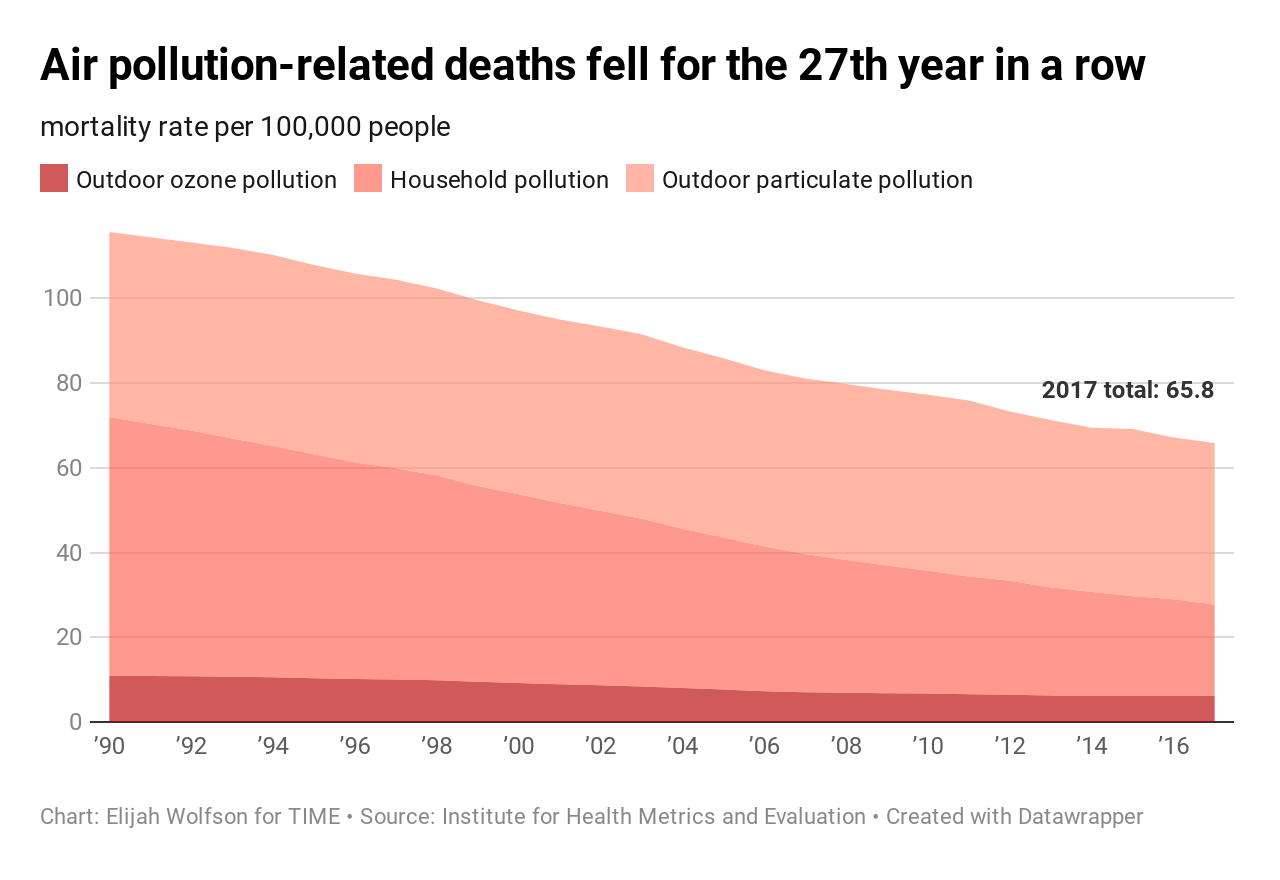 While at the same time, more and more people around the world gained access to electricity… 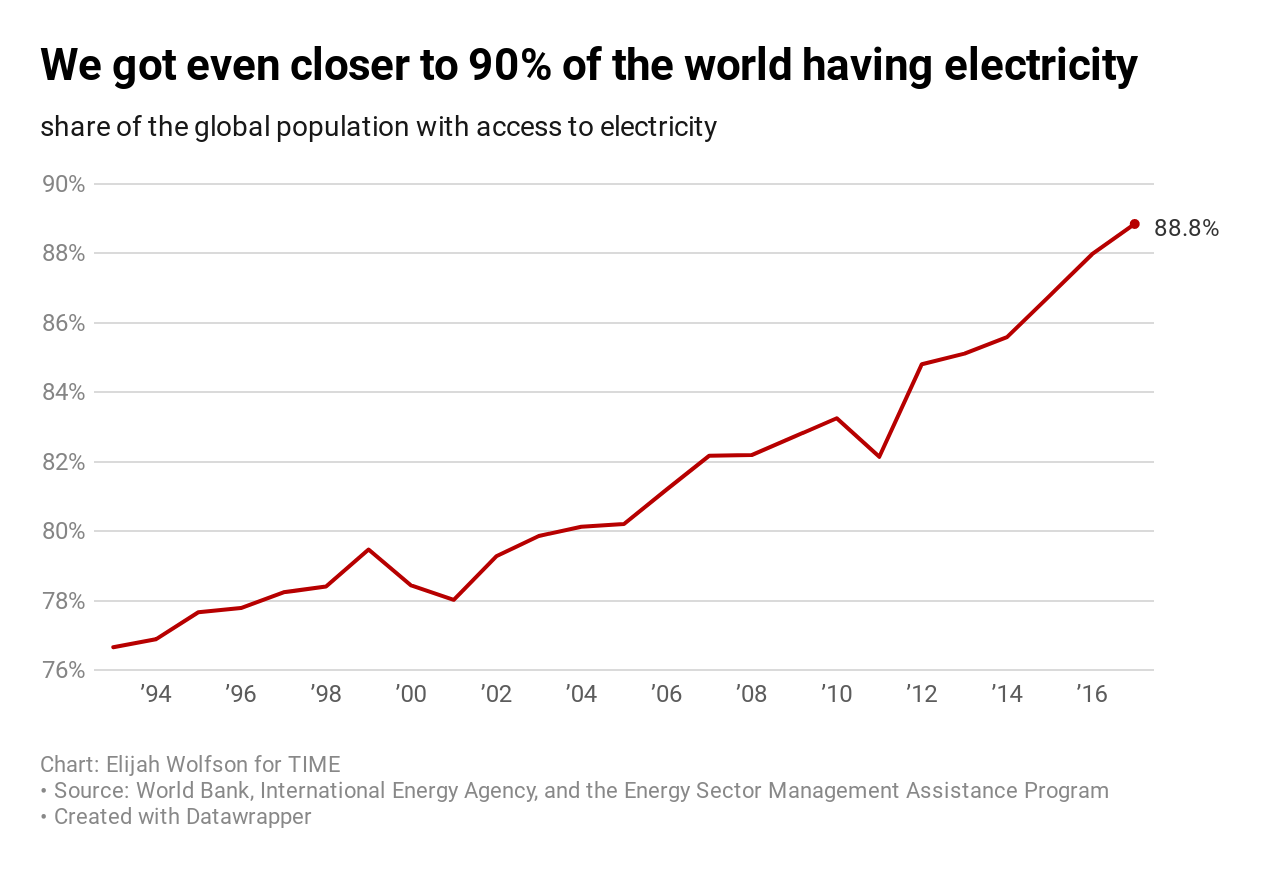 …and the share of energy coming from renewable sources reached an all-time high. 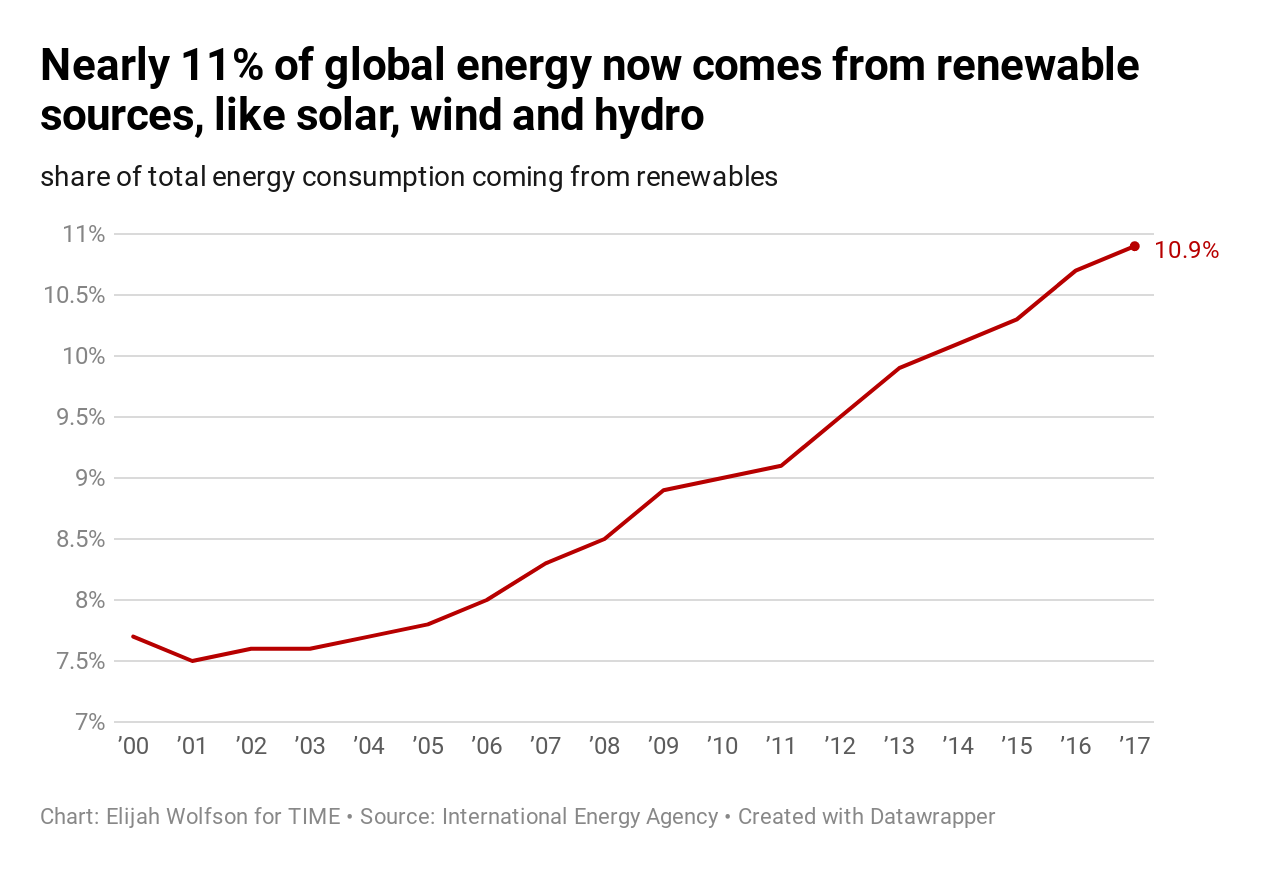 This good news is due largely to renewable energy becoming more and more price-competitive with fossil fuels; it’s getting to the point that many of the oil and gas majors are themselves investing in green energy. In 2019, such companies sealed some 70 clean-energy deals, according to Bloomberg data. And on the other side of the coin, investors are starting to rapidly divest from fossil fuels. An analysis undertaken by the environmental advocacy nonprofit 350.org found that assets of institutions now committed to divestment grew a ridiculous 22,000% from 2014 to 2019. Yes, you read that right: 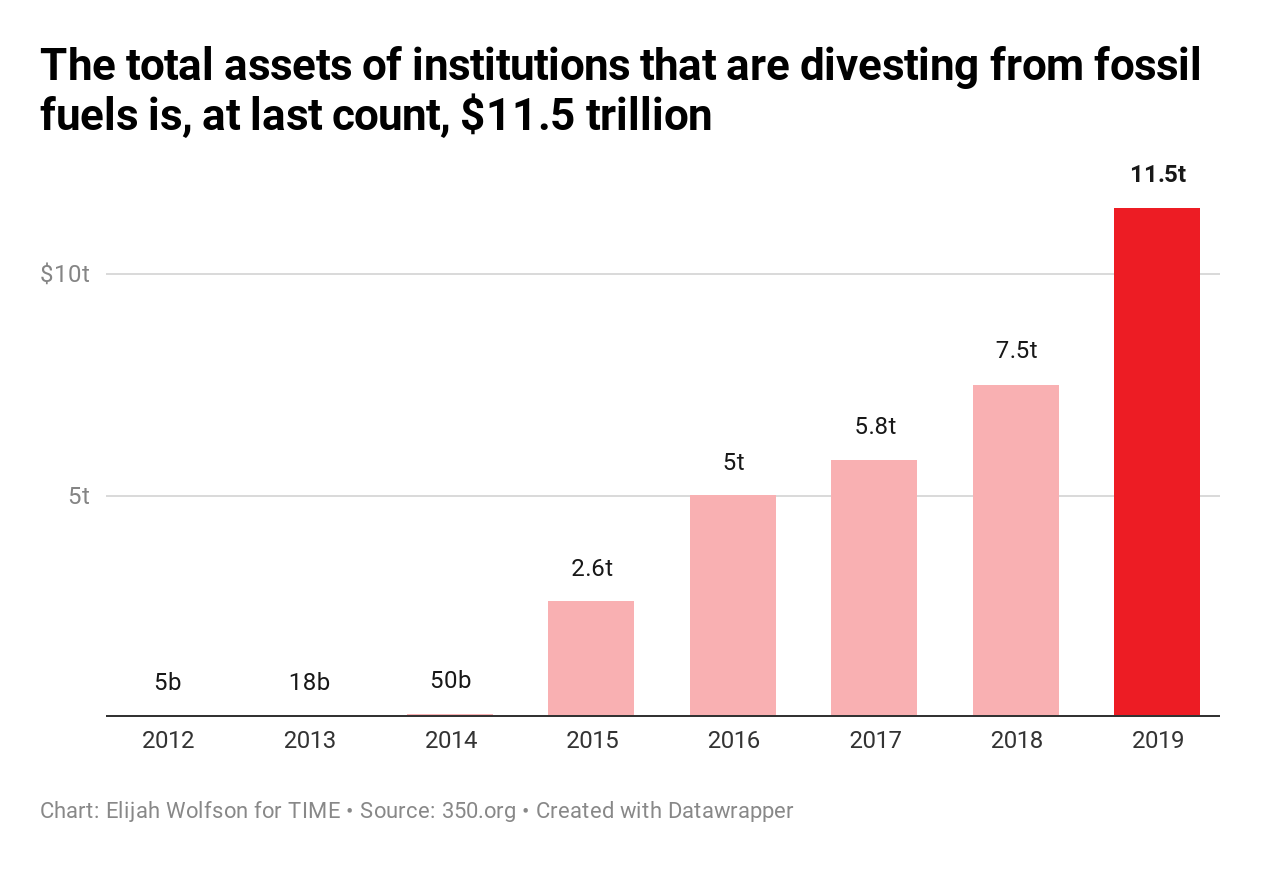 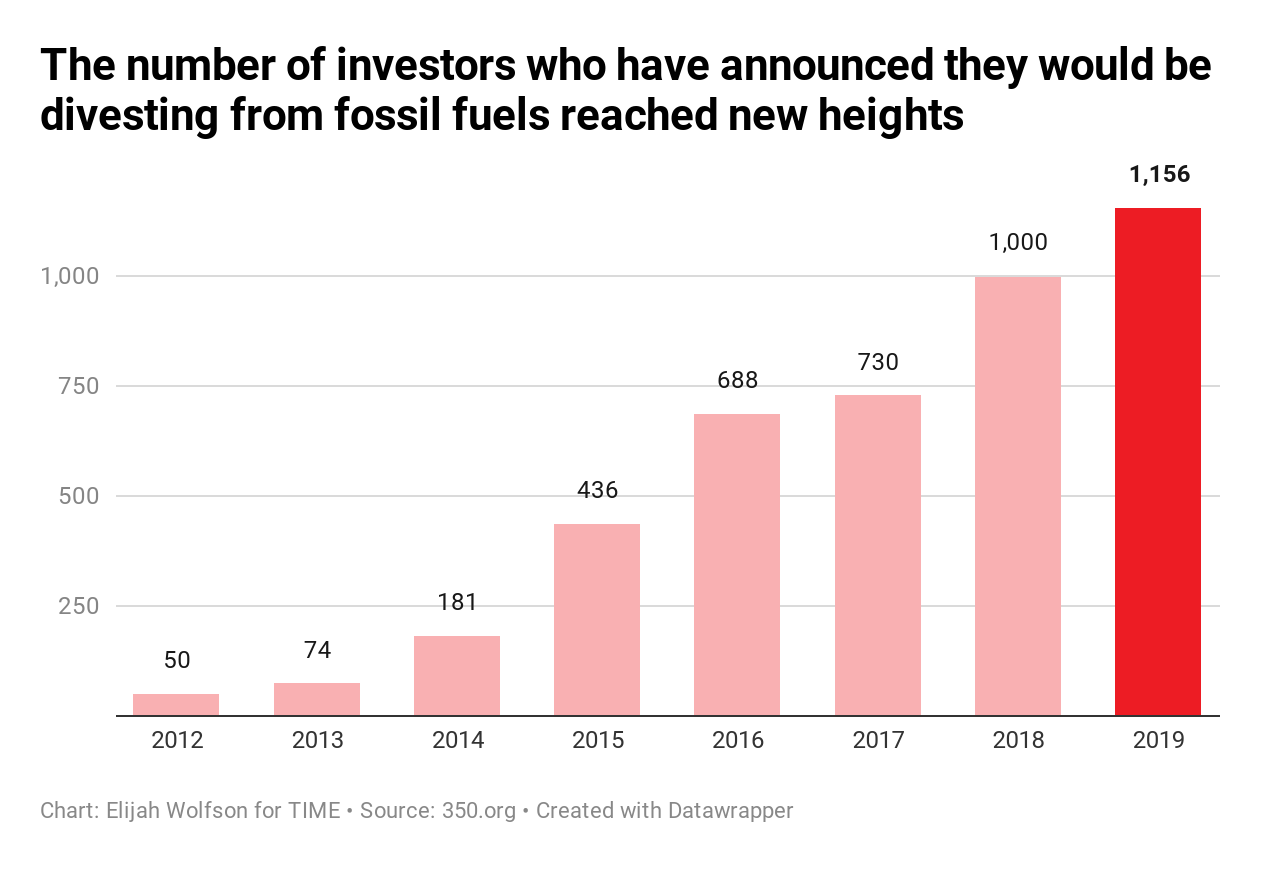 Again, there is a staggering amount of work still to be done, but these are encouraging signs of the world is starting to come to terms with reality.

Access to the sorts of resources that enable people to improve their lives has, in general, expanded in the last year. Electricity is important, but safe drinking water is even more essential, and the latest data from the World Health Organization and the United Nations Children’s Fund show that a greater percentage of the world population has access to potable water than ever before. 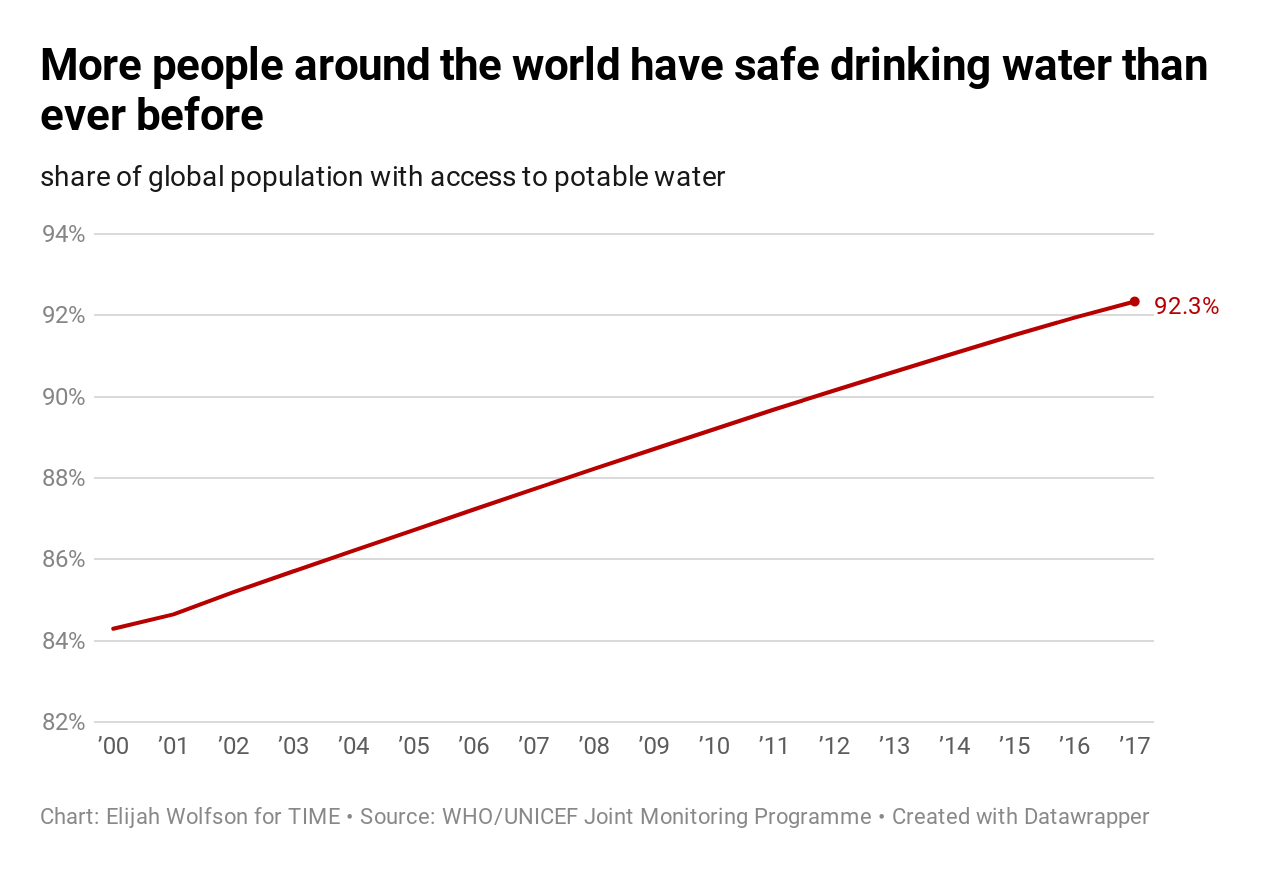 Though it can be very challenging to determine, on a global scale, who is rich and who is poor, and how wealth is distributed, most methodologies are in agreement: more working people have the financial means to live securely than at any other time in recorded history. The chart below tracks a metric that accounts for inflation, as well as the variation in expenses from country to country. 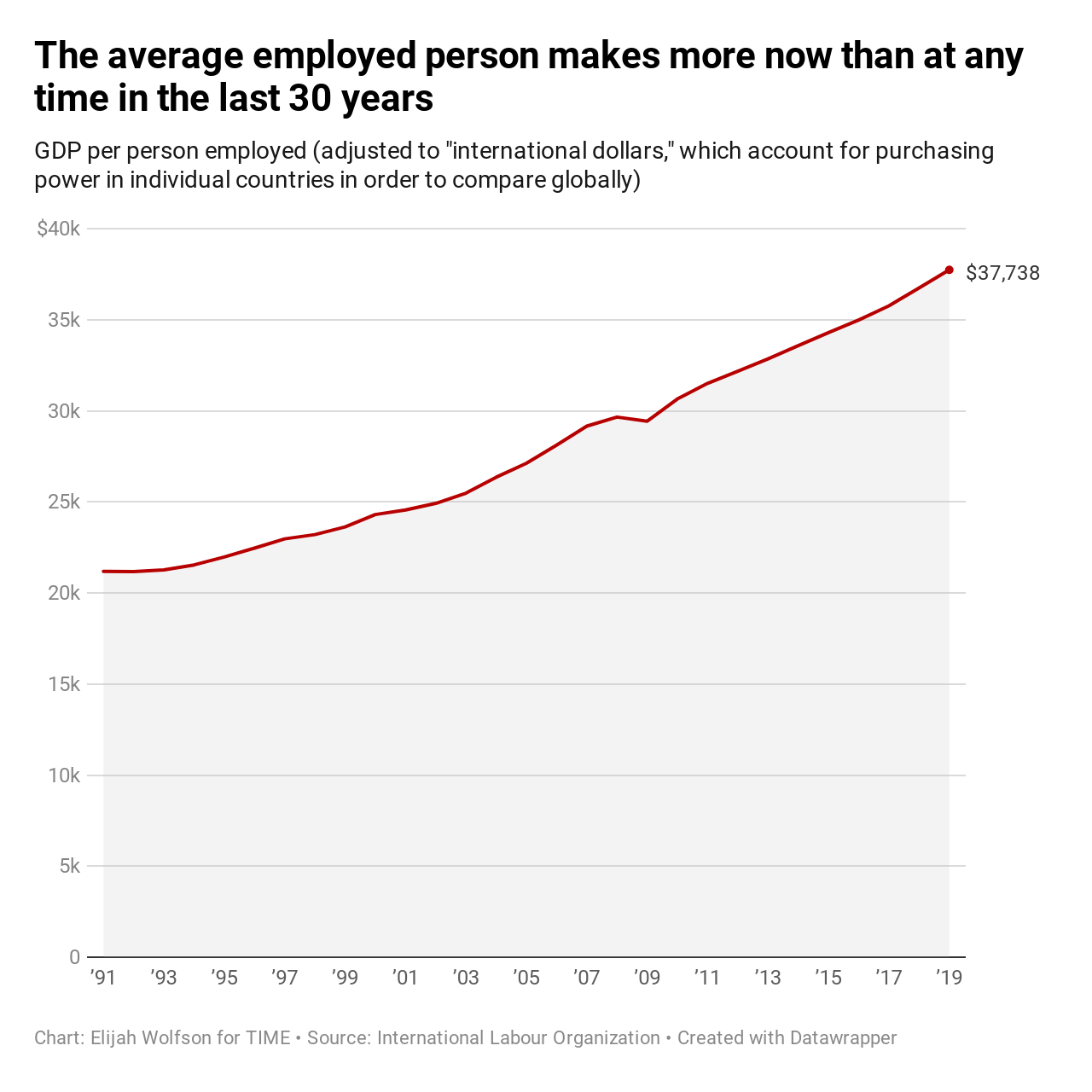 Access to health care, safe drinking water, reliable electricity, and financial capital all have a huge impact on one thing the majority of parents everywhere care about most: that their children can get a good education, and therefore, opportunities that they themselves didn’t have. So it’s no surprise as these other metrics continue to rise, so do the rates of global literacy—a fairly good indicator of overall education. 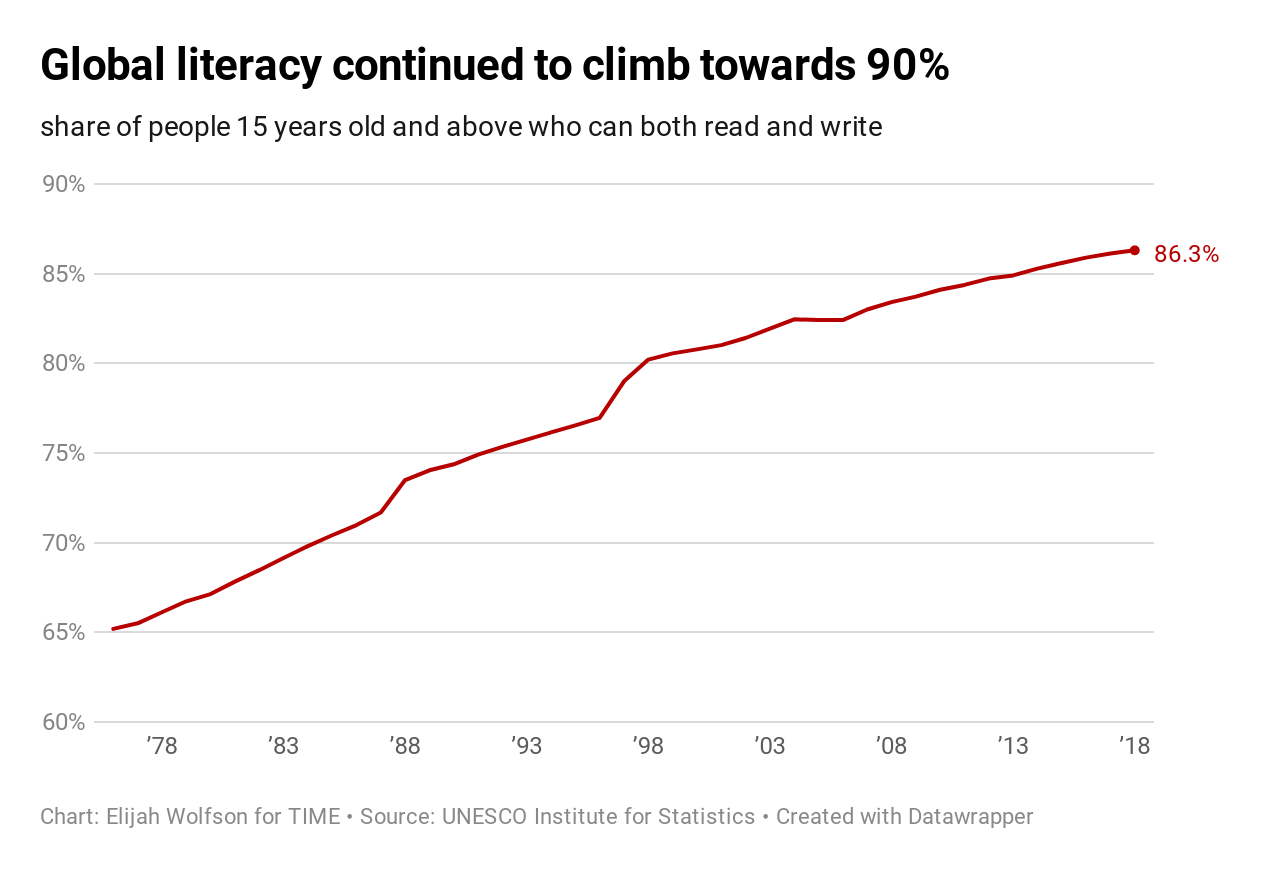 Similarly, students enrolled in primary schools across the globe finished their schooling at a rate higher than ever before. 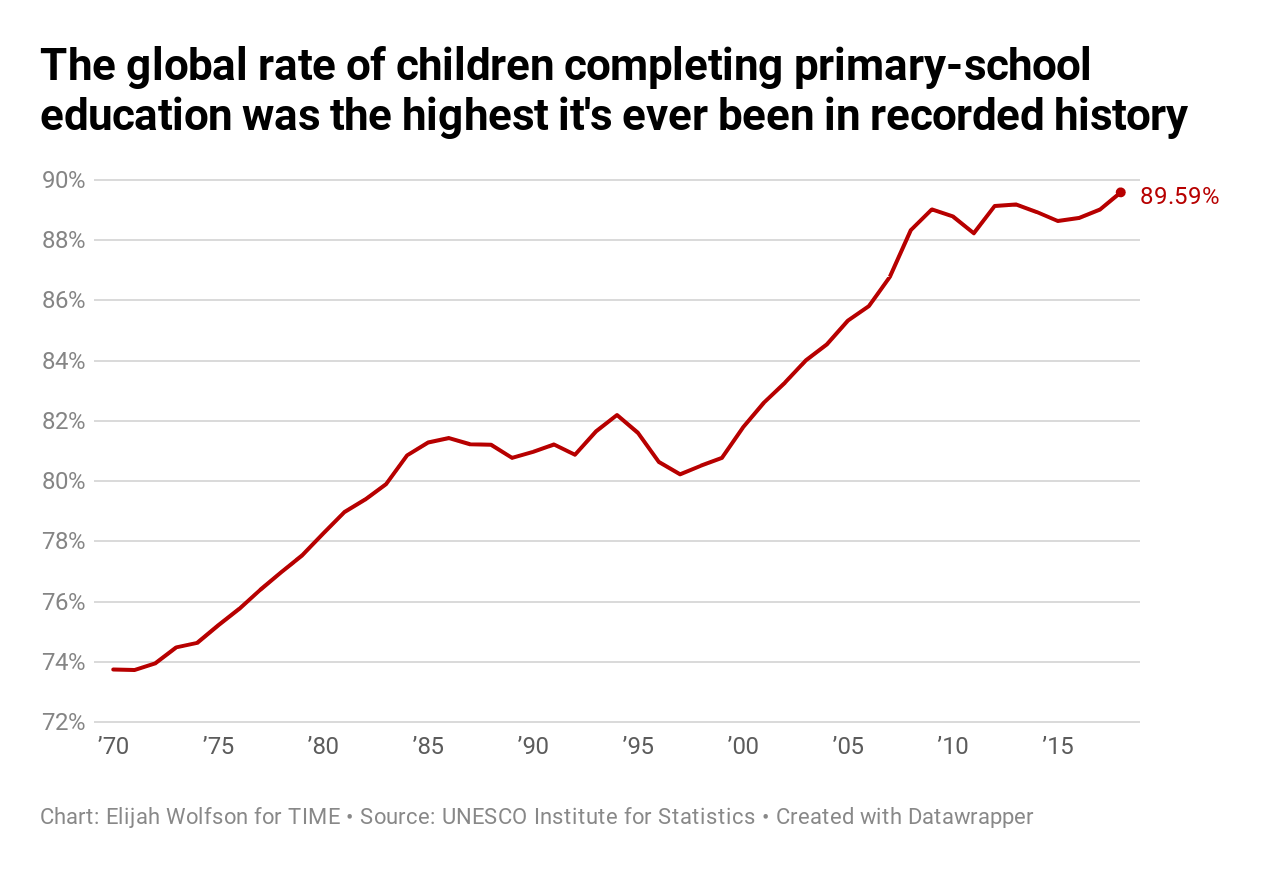 Even better, the historic gap between male and female students finishing primary school continues to narrow, according to the UN Educational, Scientific and Cultural Organization: 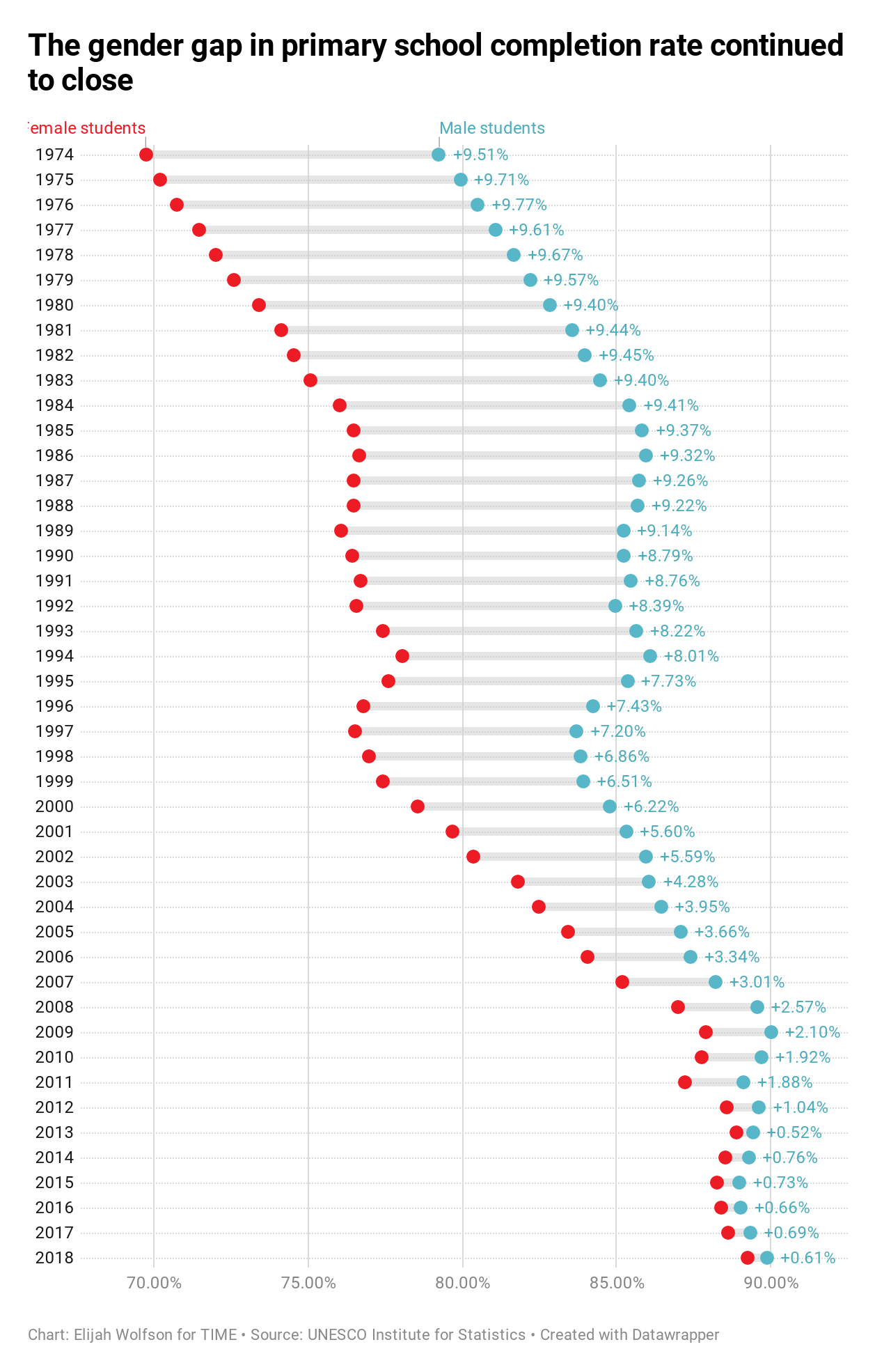 Other significant, ongoing advances in global gender equality can be seen in the data published over the last year. UN data show that fewer and fewer adolescent girls are being exploited by being married off and forced to have children in their teens, for example. 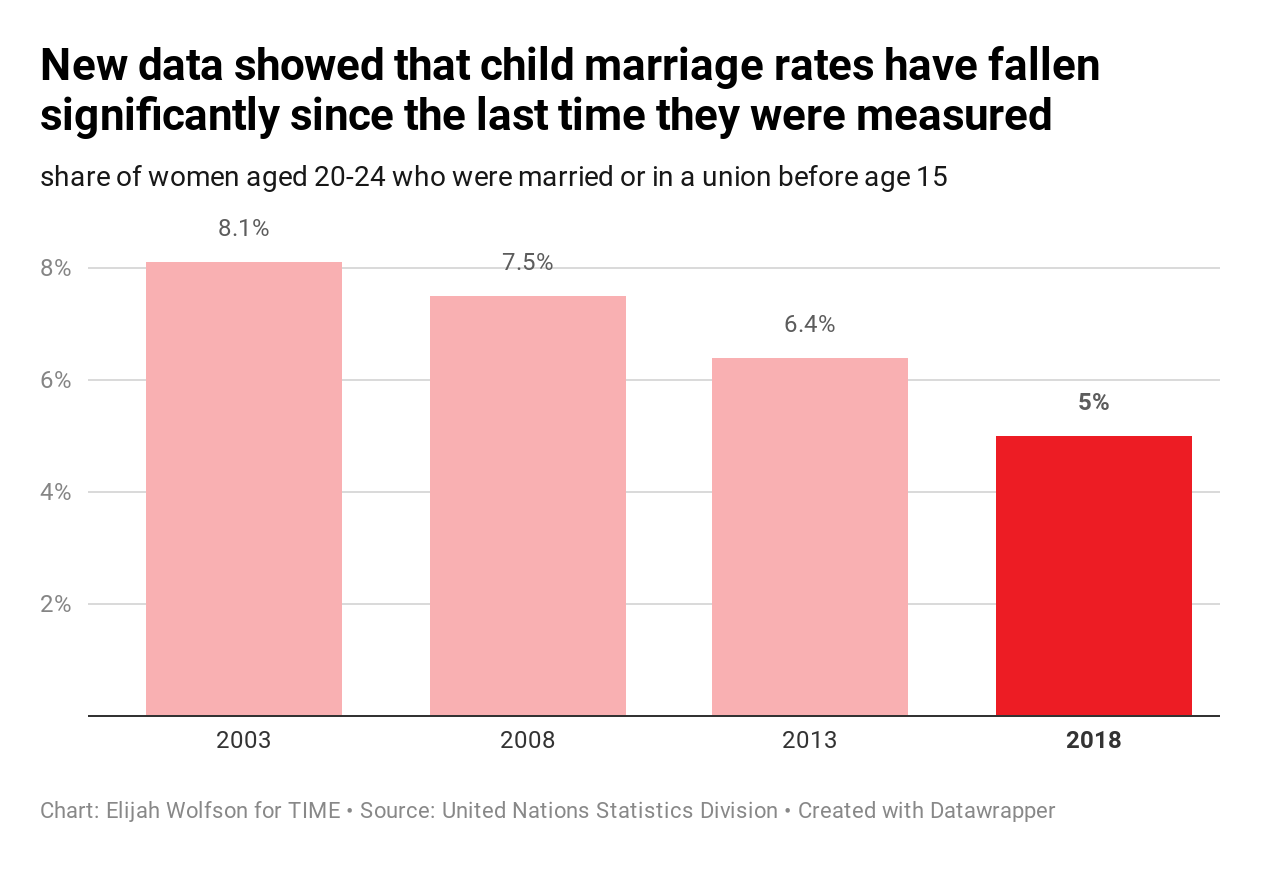 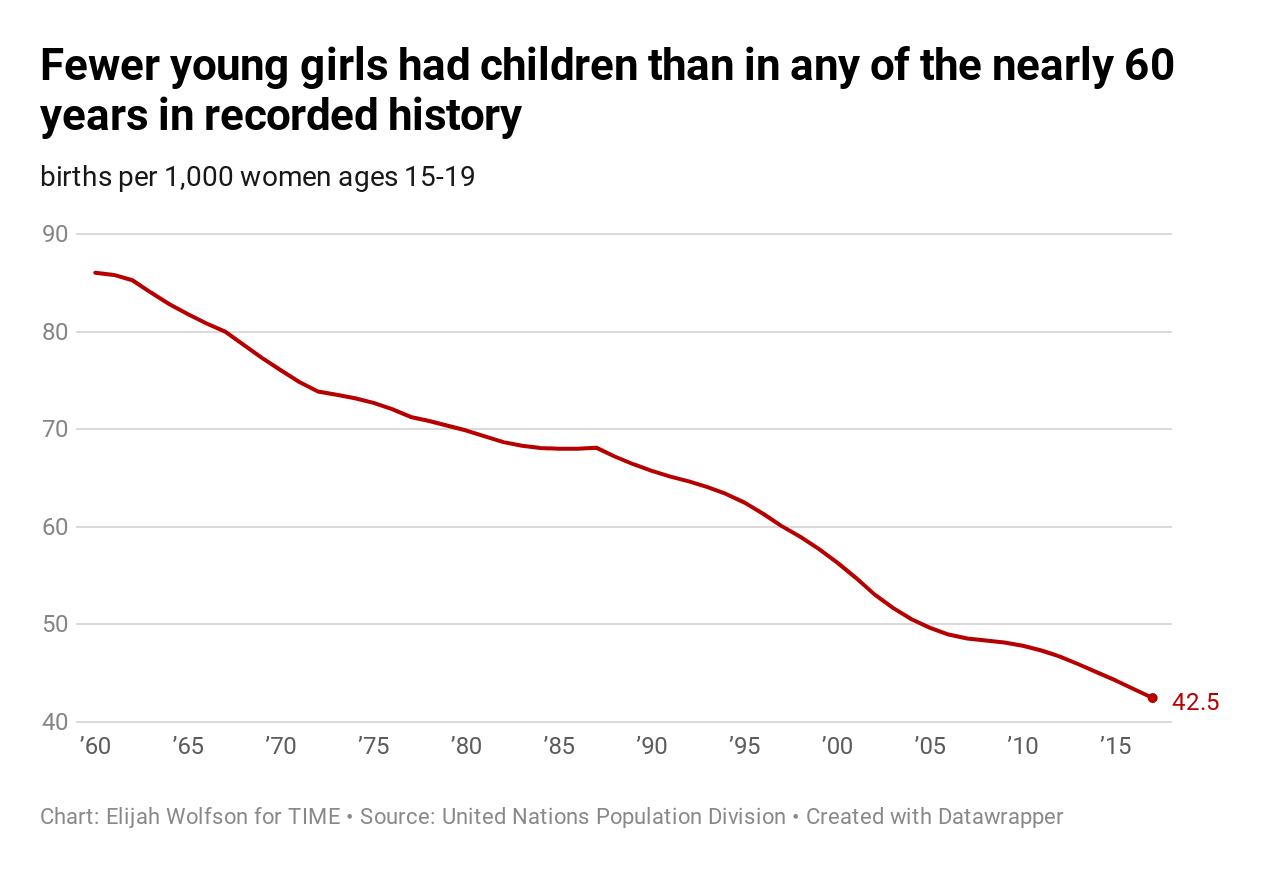 And, though there are still miles to go to achieve gender equality at the highest level, at the very least, electorates around the globe are continuing to wise up, voting a larger share of female legislators into office than in every year since these data have been tracked by the Inter-Parliamentary Union. 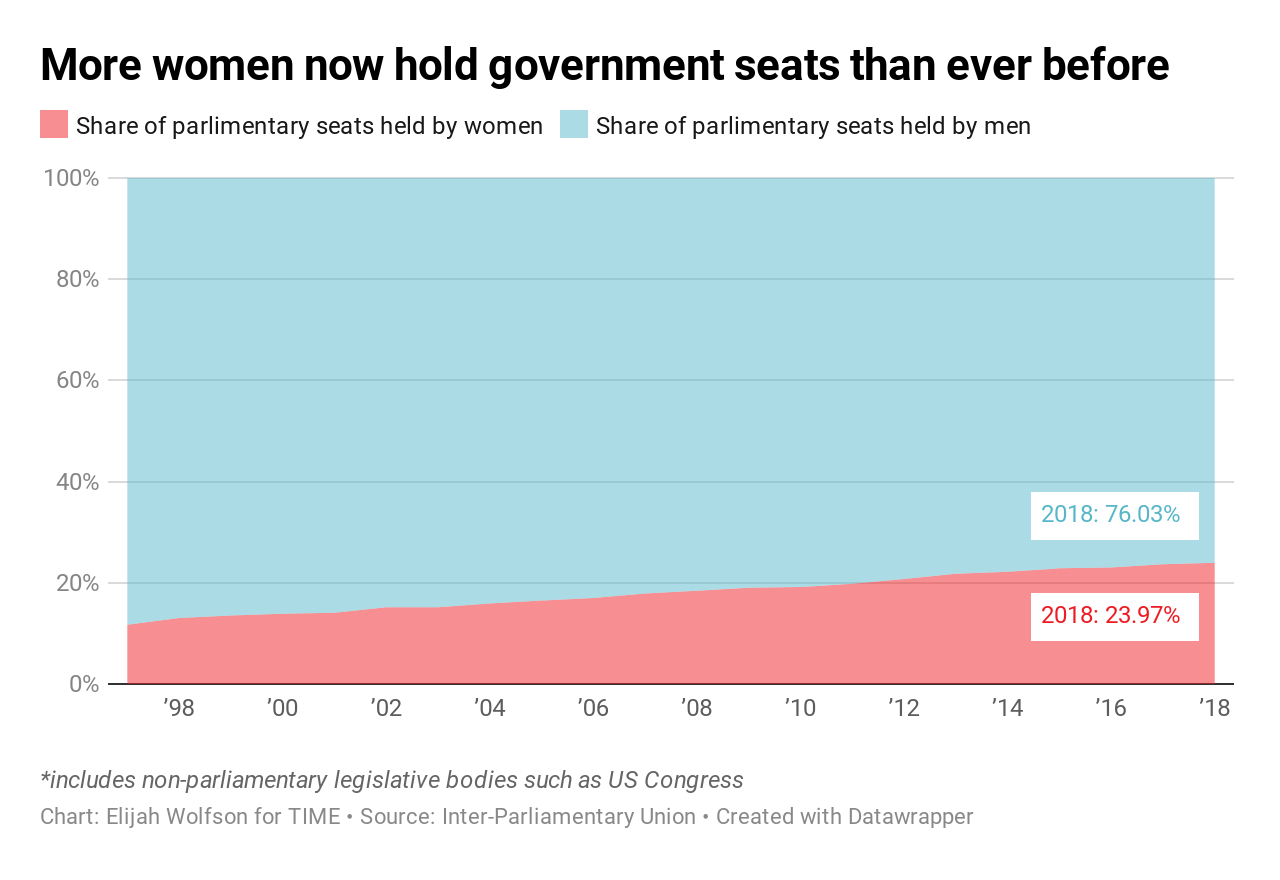 These are, of course, relatively meager gains, and there remains a massive global gender gap that, at current rates, the World Economic Forum predicts will take another 100 years to close. But at least the trend is in the right direction.

Perhaps the most straightforward (if overly simplistic) way to assess total global health is to look at life expectancy. And on that front, the world appears very healthy indeed. According to the United Nations Population Division, a person born in 2017, on average across the world, could be expected to live to be 72.4 years old, the highest number in nearly six full decades of record-keeping. 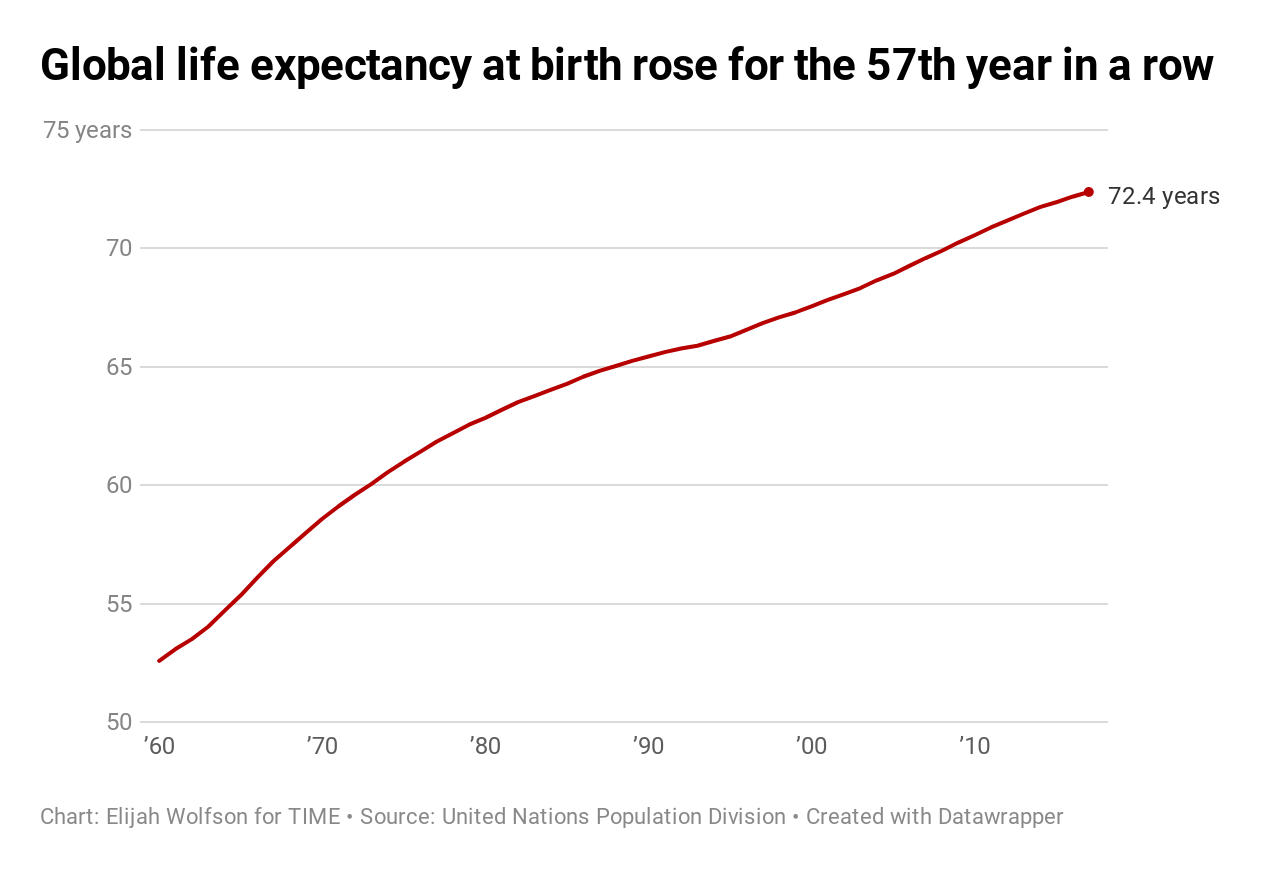 One of the primary reasons for these ongoing improvements in long-term outlook is the widening dissemination of effective care models for newborns and for women throughout the course of pregnancy and delivery. Both infant mortality and maternal mortality rates reached new lows in their respective recorded histories (at least globally; the U.S. is unique in its failures on these fronts). 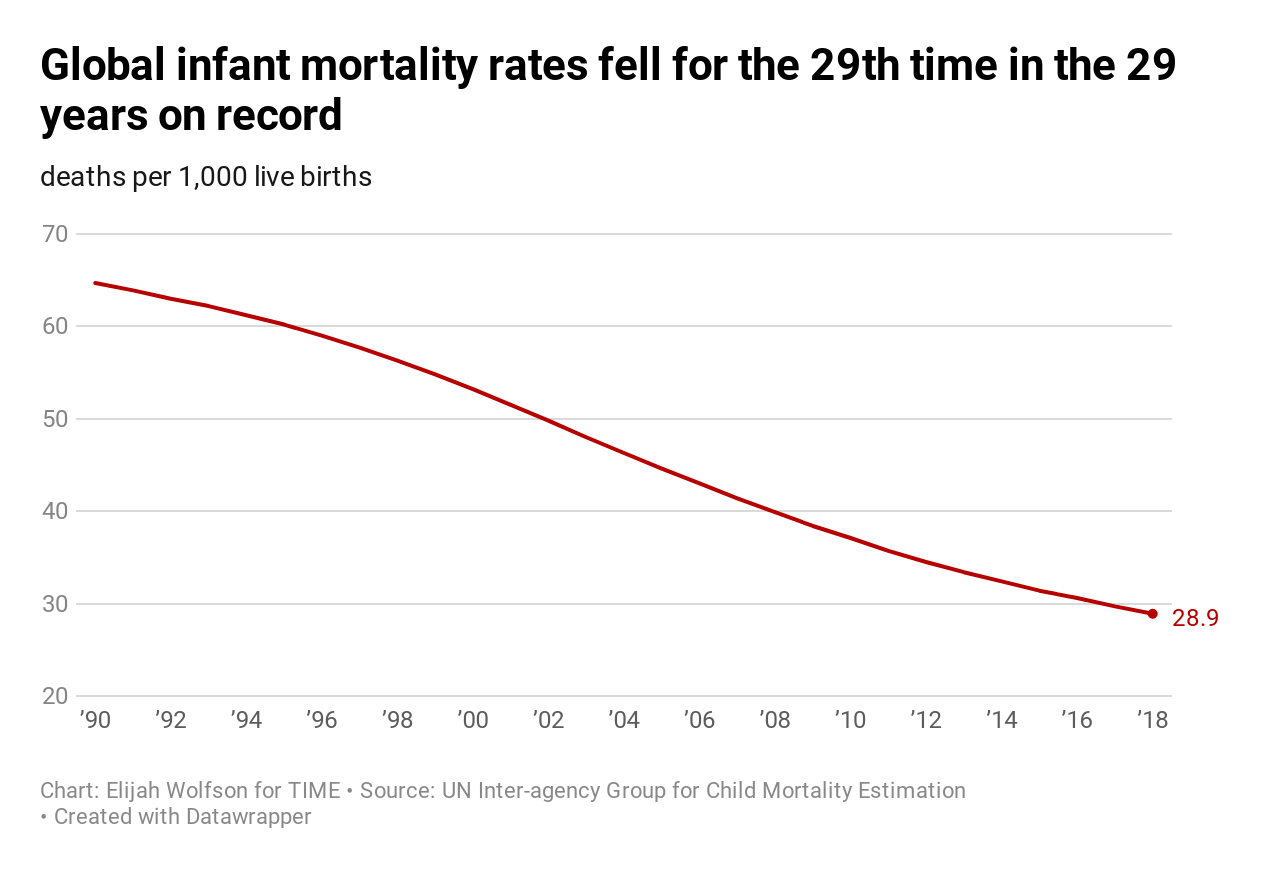 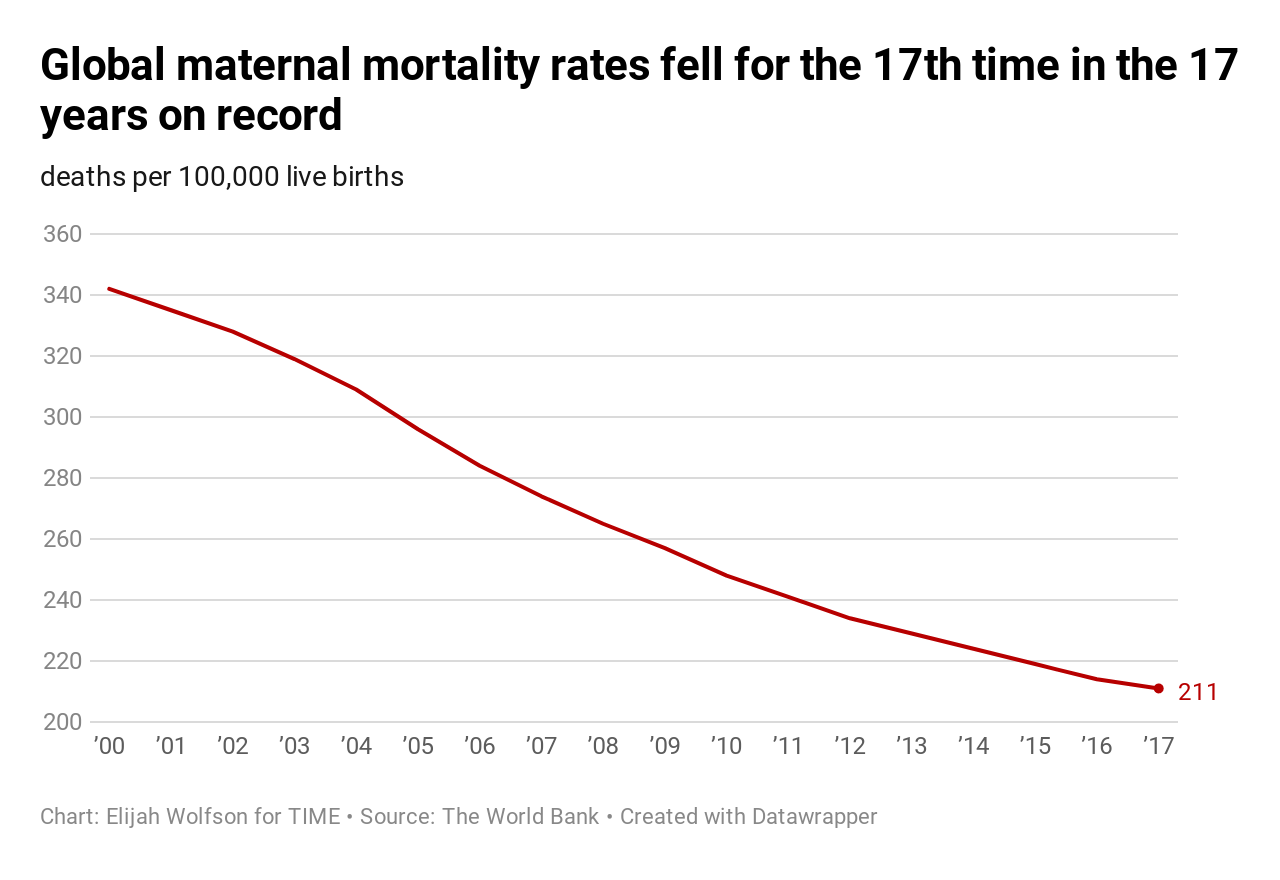 Another reason for the overall increase in life expectancy is that more and more people around the world are gaining access to essential health care services. 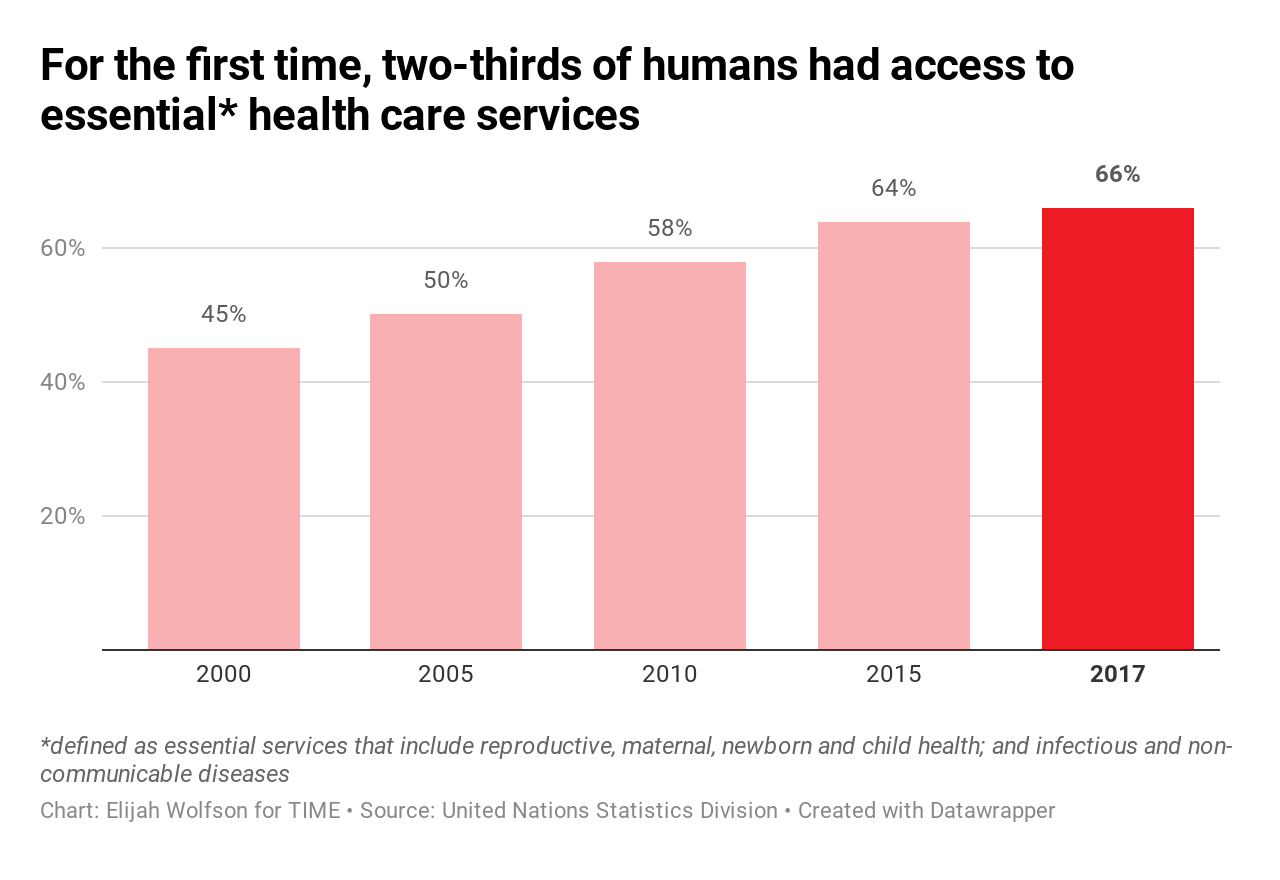 Of course, that means one-third of people still cannot get basic health care. But we are making real progress all the same.

Drilling down to the level of specific illnesses, one compelling example of recent successes in public health is the global response to AIDS/HIV, which has led to significant advances in both prevention and treatment. New HIV infection rates are at an all-time low, and the percentage of people with HIV receiving antiretroviral treatment is at an all-time high, according to UN data. 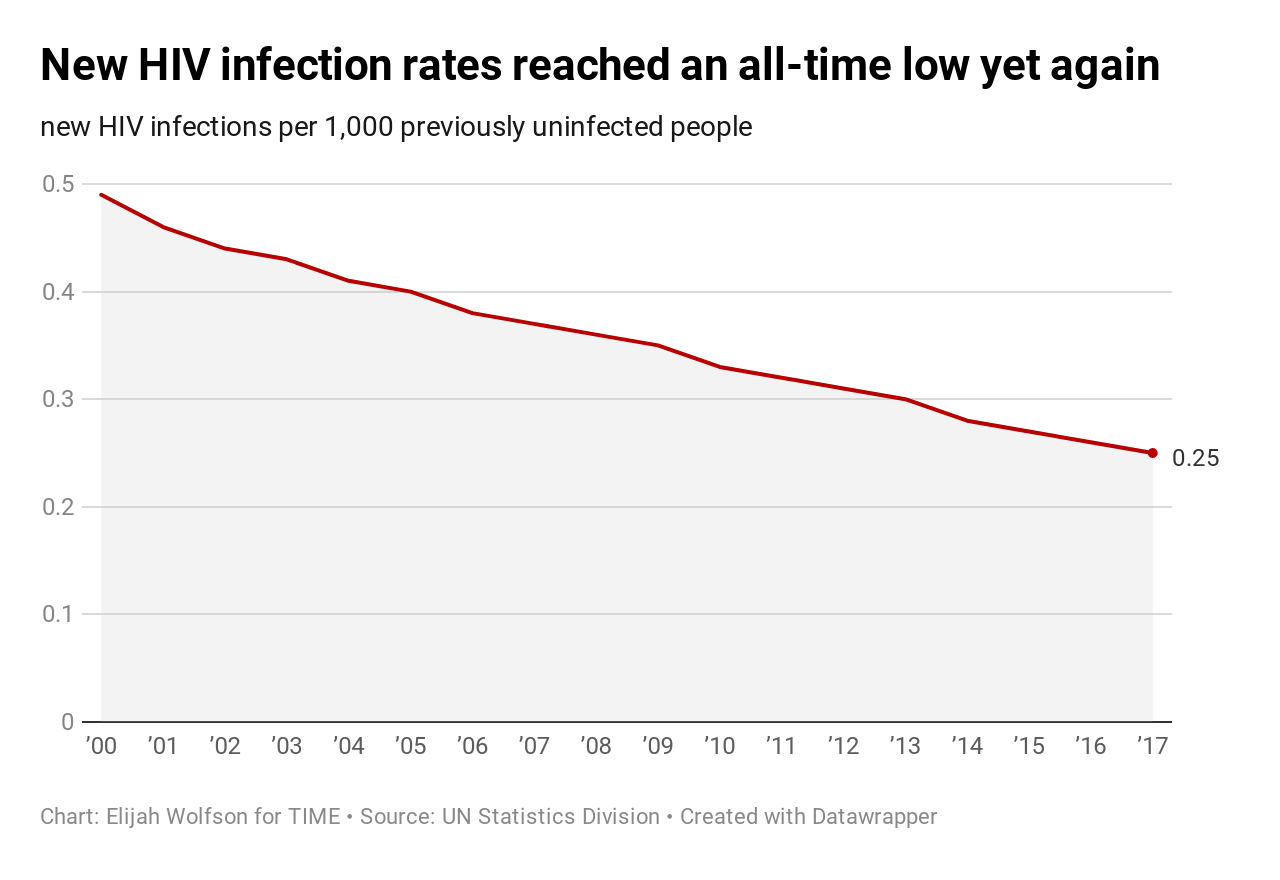 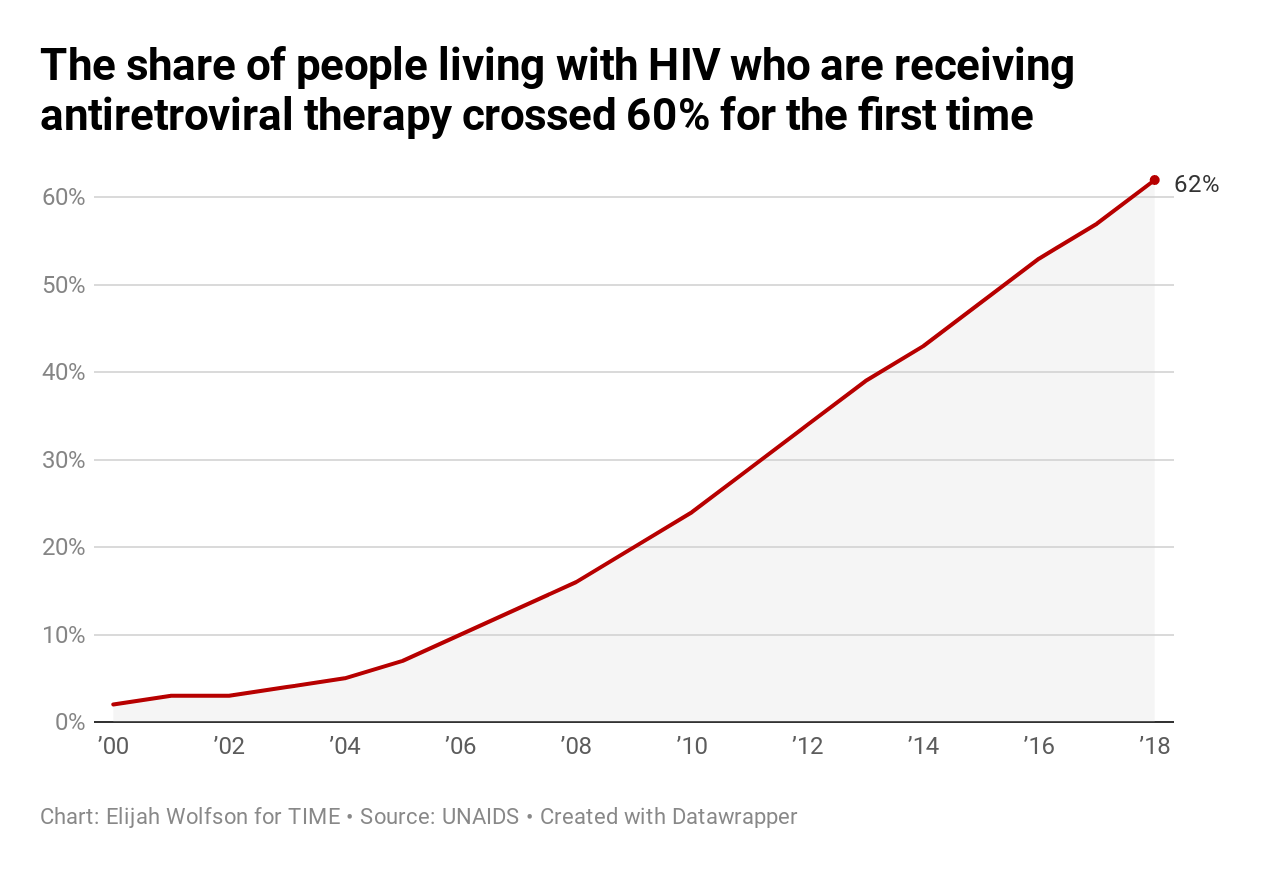 And for good measure, one last chart: while it’s true that more and more people are getting cancer every year, it’s also true that medical science has become better and better at treating this class of illness. In about 20 years, the global cancer mortality rate has fallen about 15%. 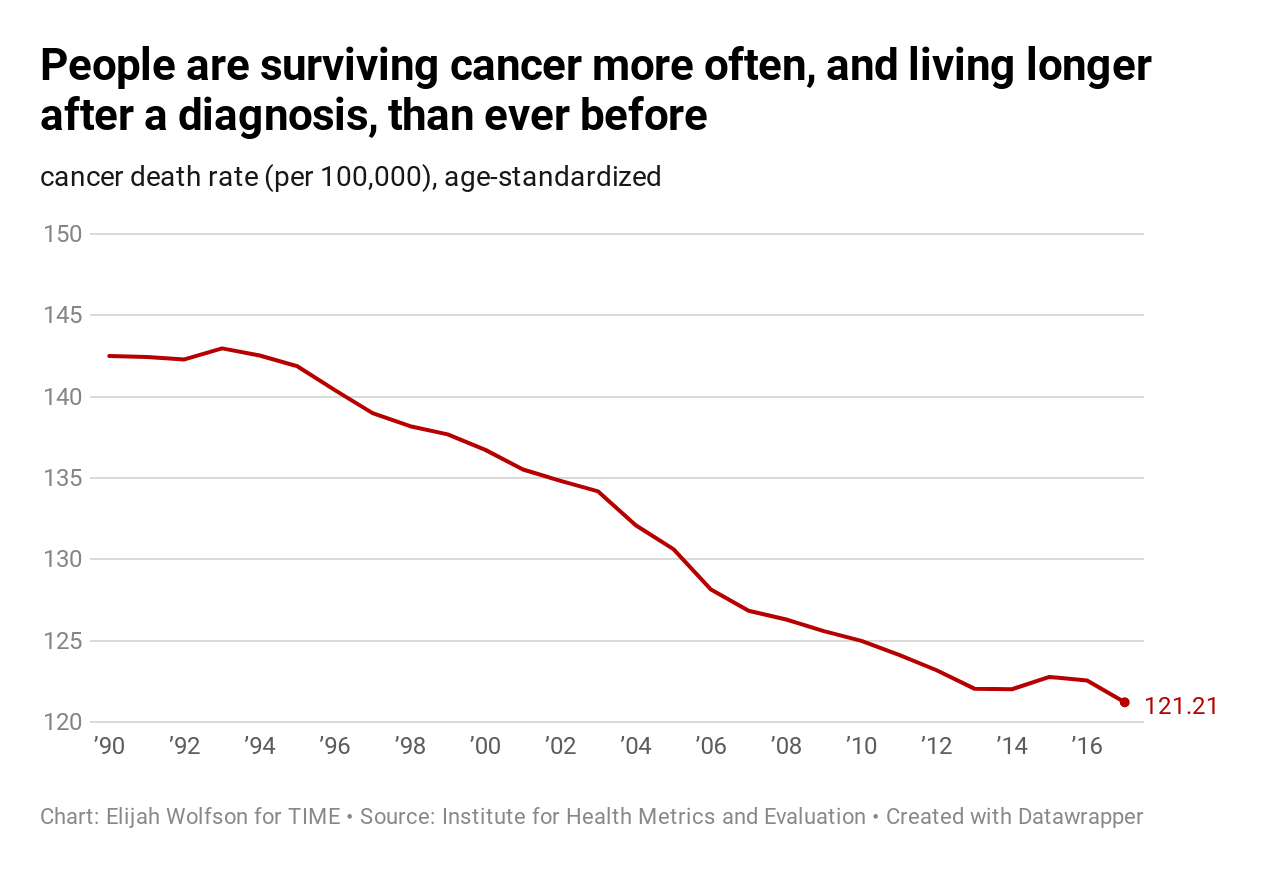 It’s one of many, many examples of the reality that the world has never before witnessed a time of such immense potential when it comes to human health.